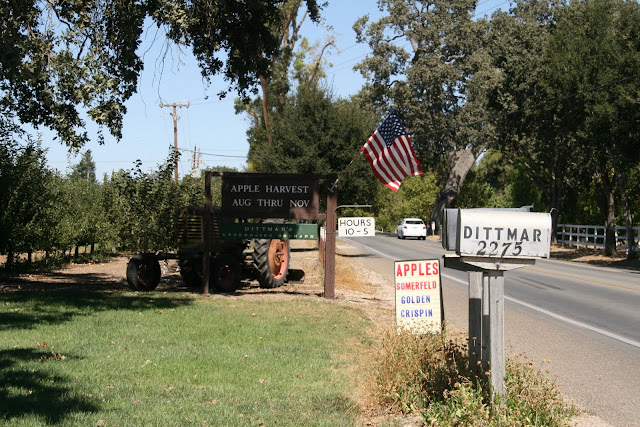 Dittmar Apple Orchard.
You leave your money in a box if Mr. Dittmar isn't there 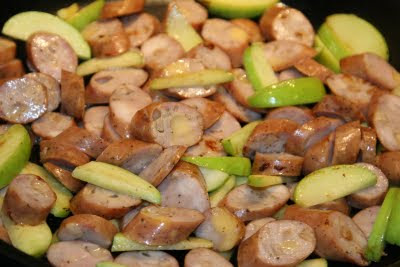 Cook the apples in butter with a pinch of salt first
Then add the sausages. (sliced and cooked by Katherine) 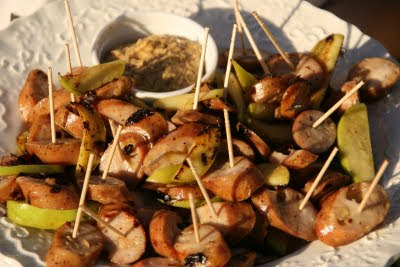 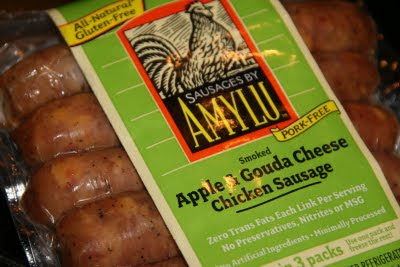 I like almost all sausages, but these Smoked Gouda and Apple
ones we buy at Costco are some of our favorite! 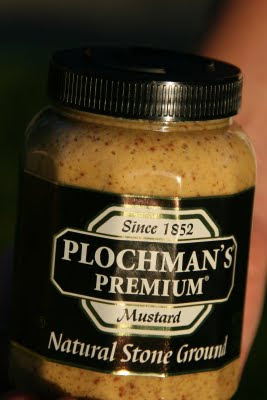 The Plochman's mustard I'm over the moon about!
Locals can buy it at El Rancho in Santa Ynez

I went to a one-room schoolhouse built in 1884 in the tiny town of Ballard, California. Ballard only had three streets in it, but it had a world famous restaurant, The Ballard Store Restaurant, as well as a church, school and cemetery. We lived in a walnut orchard at the end of Cottonwood Street. We had horses, ponies, chickens, goats, ducks, cats, dogs and sheep (lots of sheep!) At Ballard School there were 36 children in the entire school from first through sixth grade. I had ten people in my class. My sister had five in her class and my brother had only three in his class. We were all in one building separated by some partitions. I'll post some pictures of Ballard School and tell some stories about Ballard later, because there are many.

But the reason my mind is on Ballard now is because of Dittmar Apples. One of my classmates, Glenn Dittmar, had an apple orchard up the road on Alamo Pintado. I grew up eating these apples. The season for Dittmar apples is only about 6 weeks from late August until the beginning of October. And during those six weeks we eat SO MANY APPLES. I know I should give you some of my favorite apple recipes to go with these apples, but the honest truth is that they are so wonderful that I just eat them straight or with a little cheese and crackers. Sometimes I'll eat three apples in one day. For those of you who are lucky enough to live near an apple orchard you know that an apple you pick from a tree is a completely different product than something you buy in the grocery store. In Ventura, I often buy apples at the Farmer's Market. They have great ones there too. But when Dittmar apples are in season, I am sure to drive up to get some!

I will include this very simple recipe that we often make as either a snack before dinner or in the case of tonight when we were very hungry and didn't have a dinner plan, we made these for dinner.

1 tablespoon butter
2 apples, cored and sliced (I leave the skins on)
pinch of sea salt
4-6 sausages, sliced (we use Amy's Smoked Gouda and Apple)

serve with Plochman's Stone Ground Mustard or mustard of your choice

In a large saute pan over medium heat, melt the butter. Add the apples and a pinch of salt. Cook for about 2 minutes until apples begin to soften.

Add sausages and cook until browned. (The sausages we used are already fully-cooked so all you have to do is reheat them. If you are using a raw sausage you will need to cook it through)

Serve with mustard. We often put them on one big plate with toothpicks.
Email Post
Labels: Apples and Sausages Dittmar Apples Plochman's Mustard

AmyKayS said…
We eat football food on Sundays and also on Monday nights at our house during the NFL season. We are even so bad, many times we eat a bunch of different kinds of what we refer to as appetizers, versus a sit down meal with a main course and sides. This is going into our rotation for football dinners! Thanks, Maili! The kids can be in charge of this one and it looks delicious as well as simple!
September 28, 2009 at 9:36 AM

Taj food said…
Well, it’s a nice one, I have been looking for. Thanks for sharing such informative stuff.
dried fruit company