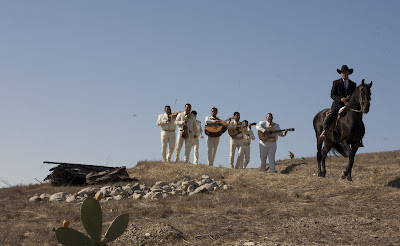 David riding in on his horse with the Mariachis behind him 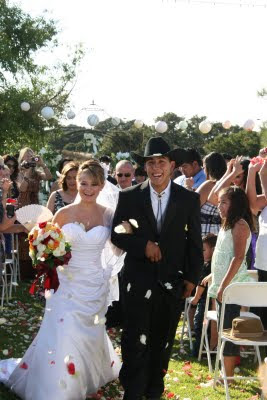 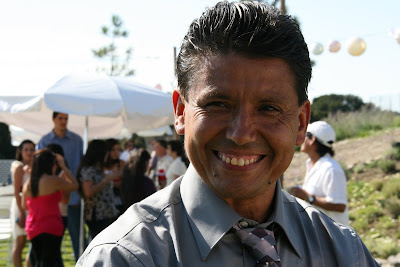 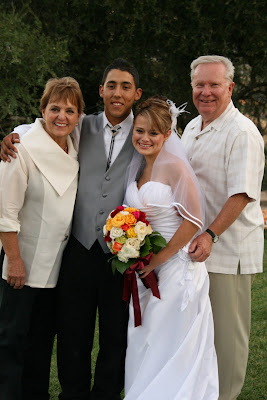 My Mom and Dad with the Bride and Groom
Once there was a boy who was born in the tiny tiny town of Los Vergara, Mexico. It is outside the tiny town of San Martin de Hidalgo, which is about two hours drive from the city of Guadalajara. He was born into a very loving and supportive family. In the Mexican culture, the father usually reigns supreme and eats before the children, but this father loved his children so much, he always made sure they had enough to eat first. His children in turn learned to be very generous with food. This family is the Uribe Family and they always share and give with anyone who happens to stop by. Some of the most delicious meals of my life have been with this family.
But let me go back to this boy. This boy was Armando Uribe and he followed his brother, Justo, to America in search of opportunity. Armando and Justo both worked as cleaners at the bakery when they first began. But they were smart and hard-working, they learned quickly and in no time worked their way up. Justo became the head baker and Armando the head wedding cake baker. Eventually, all of the brothers and sisters came. Then some cousins and finally the parents. Almost every member of the Uribe family played a part in the success of The Solvang Bakery over these past 30 years. And the families themselves were successful too. They all worked very hard, often having two jobs. They carefully saved their money and bought homes. Then the children and grandchildren of this family went on to to Law School, Real Estate, Banking, Coaching, Soccer, Cooking, Photography, Music, and Education. Their positive influence is seen everywhere.
Armando grew up and married Leti. They had a daughter named, Elida, and a son named, David. Armando not only became a master cake decorator, but he also went to school and became a professional photographer and skilled landscape designer as well. I truly don't think there is anything Armando can't do. His talents are unending. For those of you who have had one of the famous gingerbread houses, commissioned cakes or wedding cakes, Armando has played a hand a creating your masterpieces.
I remember the day with great pride when Armando took his citizenship test and became an American citizen. I remember how proud he was and how much the Pledge of Allegiance and National Anthem meant to him. He was the embodiment of the American Dream and he continues to reap the rewards that come from passionate, hard and dedicated work.
Yesterday, was Armando's son, David's, wedding. Armando asked my mother if he could have the wedding at my parent's home and my mother with tears in her eyes said "she would be honored." The wedding felt like royalty. David rode in on his horse with the Mariachis behind him. For those of you who don't know the history of the Mariachis, they played for the Emperor of Mexico, Maximillian, at his wedding in the 19th century. I wanted to have Mariachis at my wedding, but at the time we couldn't afford it.
David married a beautiful girl, Yctzu, from an Aztec family. In her family they all have the most beautiful Aztec names, that are easier for me to pronounce than spell (but then again, so is Maili.) It was a glorious day of celebration. My mom, my sister and I couldn't stop crying. It was the American Dream come true with all the hope of the future to come.
I have learned countless recipes from this family and I will share those on another day. The food at the wedding was delicious. Everything grilled over a real oak fire, overflowing bowls of fresh fruit, homemade jaimica, lemonade, iced-tea and horchata, the very best nopales and fresh salsa. My nephew, Barrett, said "Mom, I wish I could eat like this everyday. This food is THE BEST!" We are so Blessed to have this family to share their food and celebrations with us!
Email Post
Labels: Armando David and Yctzu's wedding The American Dream