(Banana Bread and Waffle Recipes below, scroll down) 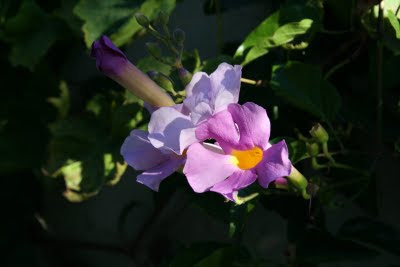 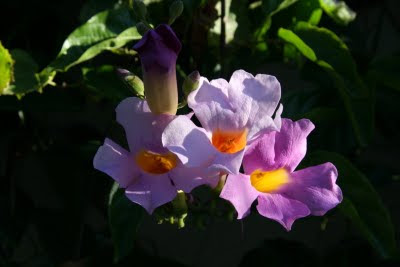 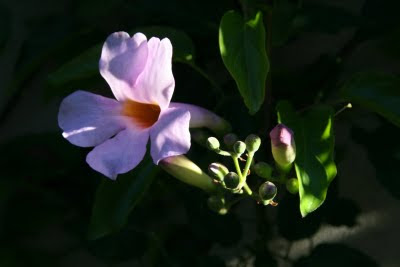 Trumpet Flowers, out my kitchen window, in the morning sun

The recipe testing e-mail below was originally written in March 2009. This morning, when I was rinsing the breakfast dishes, I looked out the kitchen window. The morning sun was shining on my trumpet flowers and their beauty made me smile. I originally only sent the below e-mail to the recipe testers because I thought seemed too personal (or silly of me) to put on the blog. But this morning the trumpet flowers reminded me of the violets. My friend, Ann Hutchison, suggested I plant the trumpet flowers about 3 years ago, so that someday in the future I would have a beautiful view when I looked out my window. Well, they didn't bloom forever. They grew lots of green, but no flowers. I thought I was doing something wrong. The first day they bloomed was the day I found out the Kornbluth's house had burned to the ground in the fire in Santa Barbara. I was devastated by the loss of their home because I felt so connected to the earth when I visited them. Their house was such a part of them, their art, their music and their lives. It had magnificent natural views of the mountains and ocean. The loss of the house was an extra blow because Peter had already heroically saved the house in the previous fire. When I walked outside with my heavy heart, after hearing the news that the house was gone and the moutains had burned, the trumpet flowers were outside blooming for the first time. And somehow I felt it was a sign that the Kornbluth's would rebuild and their gardens and trees would grow back and the mountains would become green again. It gave me hope for a chance at renewal and blooming. I wasn't going to write any of this now because it seemed too depressing or perhaps too trite that a simple flower blooming would somehow make me feel better about their house. Afterall, it wasn't me who needed to feel better: it was them. But I have to be honest and say that every time I look at the flowers, I look at their natural beauty and then think of the day they first bloomed. I will send the menu and recipes from Max and Day's wedding in one of my next post as well as pictures of Day and Max on the beautiful Mountaintop.

We added a whole banana and a little nutmeg to this basic recipe and it was delicious. Other variations could be to add other types of fresh fruit, such as berries or peaches. Lemon zest, orange zest and/or cinnamon could also be added.

1. Beat whole eggs in a bowl until thick.
3. In a separate bowl, combine remaining ingredients. Sift into egg mixture, and mix well. Pour batter into waffle iron and bake.
Adapted from Vitantonio instruction and recipe manual, 2000

1. Generously butter a 9 x 5 x 3 loaf pan. Preheat oven to 350 degrees F.
2. In the bowl of an electric mixer, cream together the butter and both sugars until butter looks light and fluffy. Add eggs one at a time and beat well after each addition.
3. Combine the flour, cinnamon, baking soda and salt in a separate bowl. Mix them together so there won’t be a pocket of baking soda in your bread. Add the dry ingredient mixture a half-cup at a time to the creamed butter and sugar. Either add this while the mixer is running on low or turn the mixer back on after each addition.
4. Add the sour cream, bananas and vanilla and combine well.
Classic Banana Bread, Bread Draft 1 typed by Maili Halme Brocke, Maili Productions, Inc Cookbook Maili Halme Brocke March 30, 2009, Draft 2 updated April 28, 2010 MHB
Notes: A number of people have either added oatmeal to the recipe or substituted some of the flour with oatmeal. Reduce the flour to one cup in the original recipe and then add a cup of oatmeal to the recipe.
Email Post
Labels: Banana Bread Quick Vanilla Waffles Simple Unexpected Surprises