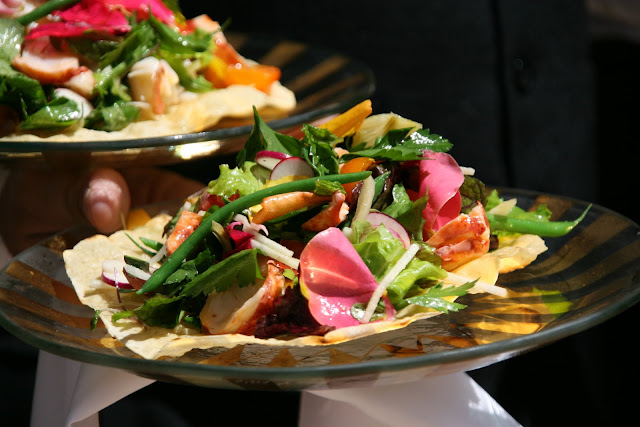 Carta da Musica is a Sardinian recipe and means Music Paper in Italian. It is a form of paper thin flatbread, as thin as music paper, hence the name. I first saw a picture of it from Ubuntu restaurant in Napa had thought it so gorgeous that I had to make it. (Here is the first picture I saw: http://www.flickr.com/photos/ulteriorepicure/3571671879/ )

The recipe I used for the bread was Giuliano Bugialli's from his cookbook Foods of Sicily and Sardinia. Here is the link with the exact description on how to make the sponge, etc.
http://www.epicurious.com/recipes/food/views/Carta-Da-Musica-232739

My husband, Jason, is a very orderly hard-working guy who likes to keep everything very clean. He is married to me and I tend to lean towards being a "creative mess." I'm an out-of-sight-out-of-mind person so I'll always set things out by the door to remember them or have post-it notes everywhere just so I can remember what I need to remember. My piles of papers and notes drive him a bit mad. It is almost comical sometimes because I'll put something by the front door I need to remember and he'll see it out and put it away. I'll put things in the car I need to bring someplace and then he'll clean out my car. I'll say this right now: It is far better to have a husband who is constantly cleaning up and always washing dishes and doing laundry and putting things away than to have someone who doesn't help at all. That being said, he figured my notes taped to the cupboard from a recent party were trash and he cleaned everything up and threw it away. He didn't realize that I had written the actual measurements to the Carta de Musica on the prep sheet taped to the cabinet. (Usually I write recipes on clipboards so he knows not to throw those away.) I just went digging through the recycling and trash and I can't find it so I'll do my best to write it from memory.  April 17, 2013 revision:  I was divorced in 2011 so it seems odd to keep this post referencing my ex-husband, but it is where I was in my life when I wrote the original recipe so I thought I would keep it as it was sent.

Here is what I did differently with the recipe for the bread. I made three versions:   One exactly like the recipe with the sponge developing overnight, then another two with the sponge only developing for 3 hours. The overnight sponge wasn't necessary. It worked perfectly well after only 3 hours. One of the keys to any version of the recipe is the Semolina Flour. Semolina looks grainy and like a fine corn meal and you would think it odd that that is what pasta is made from. It certainly doesn't look like it was made from wheat or wheat flour. The key property of semolina is that it has very high gluten so it makes it very easy to stretch the dough without it breaking. (I bought my semolina flour at whole foods. I'm sure there are other sources.)

When we were testing the first recipe we originally made it too thick and had a soft delicious bread that was like nan or a thick tortilla. So if you want a warm bread that is thicker you can easily use this same recipe for that as well. In this case I wanted a thin crisp cracker. It was a bit of a hassle doing it in the oven and I did find I could do it in a stovetop frying pan on top of the stove (going after the comal idea in Mexico that you make tortillas on) So lots of options and adaptations are possible. Finally, because this was a health conscious group I decide to add wheat flour, rye flour and corn meal. So to the basic recipe I added a half cup of wheat flour, 2 tablespoons of rye flour and 1/4 a cup of corn meal. Then in the final rolling I also added more wheat flour. For those of you who enjoy making bread, this is a really fun recipe to play around with. You'll need a bit more salt and a bit more water because of the extra flour.

And for those of you who don't want to make the bread at all and just want to make the salad, the company La Panzanella makes fabulous Croccantini (which C'est Cheese carries as well as Gelson's and Whole Foods.) But here is the link for the rest of you. The company is out of Washington, so I'm sure you can find it easily in Portland and Seattle. It keeps winning awards at the Fancy Food Show. Great stuff! Ann Hutchison introduced me to it. Thanks Ann!

The above was for the bread.  Here is what I did for the salad that I put on to of the bread.  Again, keep in mind that I was working for a very health conscious group that didn't eat dairy and we were trying to keep it along the lines of spa food:  beautiful, elegant, delicious and low calorie.  If calories weren't an issue, I would have added nuts and cheese to this for sure! (If dairy/calories weren't an issue I would have cooked the lobster in butter too!) Pine Nuts would be a great addition or Marcona Almonds. Goat Cheese or Shaved Parmesan would be lovely with it as well. The ultimate would be the Sardinian cheese, Fiore Sardo, that is a firm sheep's milk cheese.

For the Carta da Musica Salad

Delicate Spicy Greens (baby arugula, spicy mustard, NOT raddiccio or endive. I get this special mix from a farmer in Santa Barbara. His stand is in about the second block on the farmer's market.   He has a beard and his farm is in Goleta. I need to get his name.  His greens are so good they don't need dressing.)
Micro Greens (Trader Joe's carries them)
Sweet Greens (Normal butter lettuce and baby red leaf or green leaf lettuce)
Candied Fennel (regular fennel that I slice and saute in olive oil with a pinch of salt. then I sprinkle sugar over it and let it carmelize. Then I use the liquid in the pan from this as a base for the Lemon Fennel Viniagrette)
Jicama, julienned, optional
Cherry Tomatoes (I used Heirloom sun gold. use the smallest sweetest tomatoes you can find.)
Radish, thinly sliced (I used colored radishes in purples and reds)
Mint, whole leaves, use quite a bit
Italian Pasley, whole leaves, no stems (also know as flat-leaf parsley. I used 3 heads of parsley leaves)
Lobster (you can use shrimp or any other kind of protien)
Rose Petals or other edible flowers like nasturtiums or pansy's etc. Here is a link to edible flowers: http://www.ces.ncsu.edu/depts/hort/hil/hil-8513.html
Lemon Fennel Viniagrette (just a normal vinaigrette made with lots of lemon juice, the fennel drippings, salt, pepper and olive oil. You can add mustard if you like)

Mix everything together and dress just before serving. Sprinkle with sea salt and freshly ground pepper and serve immediately.

Now to the glorious news about Jeanette. She has been doing WONDERFULLY!! She went to the Ventura County Fair yesterday. There were only two rides she couldn't go on because they required her to bend her leg and the one leg she does is metal inside and doesn't bend. Her hair is growing back because she isn't taking the chemo anymore and she has this cute pixie hairdo. She looks stunningly beautiful. She had her first lung surgery in early July and recovered quickly. Her second lung surgery is August 10th. She'll go down to the hospital on the 8th. She is expected to do well and recover as quickly as she did from the first one. The only negative news was that the tumor in her lung had grown in the month, so they will be removing something larger than they anticipated, but they plan to remove all of it. Please send Prayers and healing thoughts to Jeanette on the 10th! I know she will appreciate them! Jeanette's birthday is August 19th. She will be 14 years old. And she plans to go back to Middle School on August 25th. So HAPPY HAPPY DAYS that I didn't think we'd see and my enormous gratitude to all of you! Truly joyous!!

I'll end with a link (this e-mail sure has a lot of links! Study up everyone:-) to the story of two wrestlers from Cleveland, Ohio. I usually don't watch ESPN without Jason. But I was in the gym at the homeschool conference and I wept and laughed and rejoiced through this entire show. It is in there segment called Outside the Lines. It is probably 15 minutes to watch, but SO WORTH IT! Especially when you get to the end and see the houses they live in and all that they have risen above. It is truly a testament to the power of friendship. Truly worth taking the time to watch.

We're headed to Chicago and Indiana tomorrow. We'll be back in a few weeks. Enjoy the end of summer!