The Corn is High in August in Indiana 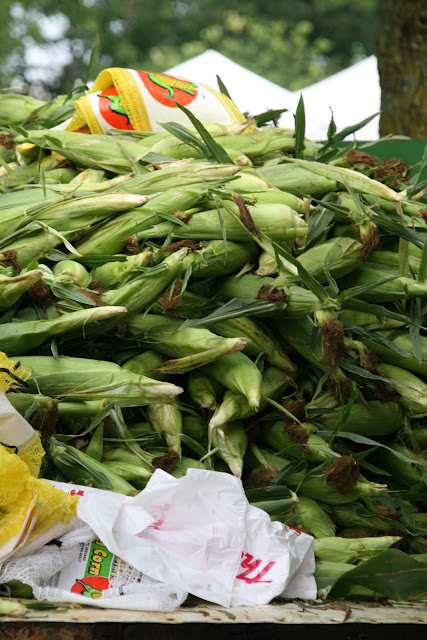 Peaches and Cream Corn at Farmer's Market in Carmel 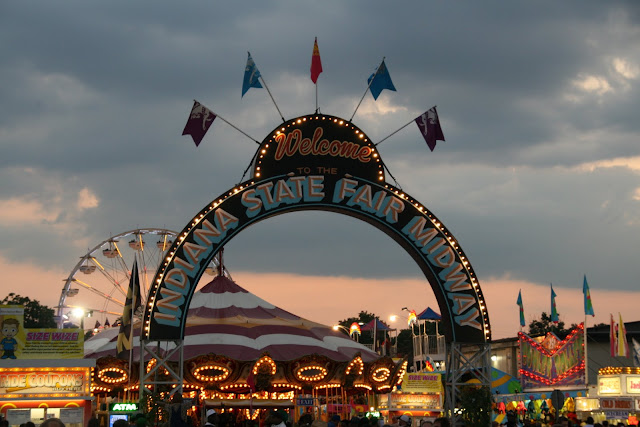 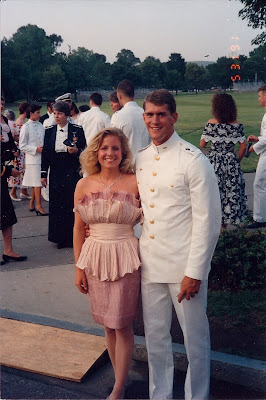 Jason's Graduation Ball at West Point, shortly after we met in 1991 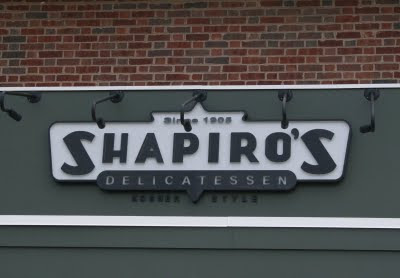 Shapiro's since 1905. Best Corned Beef in the Country 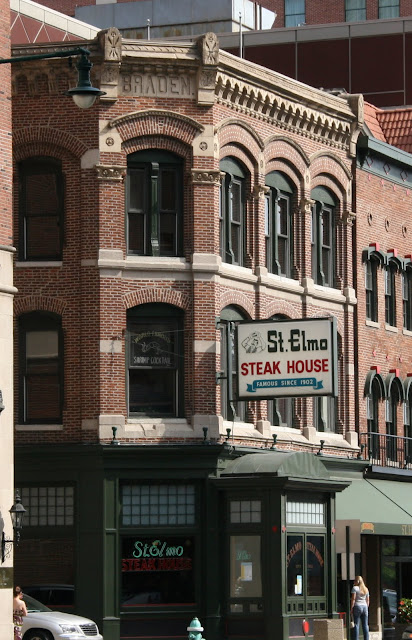 Note:  I wrote this blog post in 2009 when I was still married.  We divorced after twenty years of marriage.  I don't want to go back and rewrite history because of the divorce.  I want to leave the story as it was true then.  The girls and I are still close with all of their Indiana relatives and friends and we make a point to still try and visit at least once a year.

In the summer of 1982 John Cougar Mellencamp wrote "a little diddy about Jack and Diane, two American kids growing up in the Heartland." I was hooked. I hadn't been to Indiana but there was something about the way John Mellancamp told a story in his songs that seemed to apply to all of small town America, something I knew a lot about. By the time I was in high school Mellencamp wrote his Scarecrow album. I had the cassette tape and drove around in my car and listened to it until the tape broke. Not only was Small Town one of the songs on the album, but so was one of my all time favorites. Justice and Indpendence. I liked the mix of his rock, folksy and country sound and I loved the message. I truly listened to every song over and over and over again as John Cougar Mellencamp sang about Indiana, America and family farms.

About the same time the Scarecrow album came out I was at a high school basketball game and watched a boy from Indiana make some free-throws to win the game. After that game, Jeff Logsdon and I started dating. We dated for three years. I already knew something about Indiana because my father was an enormous fan of John Wooden and my dad also loved the movie Breaking Away. From Jeff, I Iearned even more about Indiana. He worshipped Larry Bird. We watched every Celtics game. We watched a lot of basketball. I also learned to tell the difference between a 1964 1/2 mustang convertible and a 1965, 1967, 1968...Jeff had a red 1967 that was his pride and joy. Jeff missed Indiana and told me all about Carmel, IN (pronounced like the candy, not like Carmel, CA) and Greenwood and towns throughout the state. My senior year of high school the movie Hoosiers came out and I understood what Indiana basketball was truly all about.

Then I broke up with Jeff when I met Smitty, better known as Michael Smith. Smitty is now a Catholic priest with a thriving parish in Connecticut. Michael is on the recipe testing e-mail list (Hi Michael!) and I'm still close with his family, especially his sister-in-law, Elaine. I'm mentioning Smitty now because I went to a John Cougar Mellencamp concert with him in Hartford, CT. Michael said he never saw someone so excited to be at a concert in his life. One of my favorite concerts ever! Smitty went on to become a priest, which obviously ended the romantic part of the relationship, and I went on a series of bad blind dates for the next few years.

My senior year of college I went up to visit the Noone's at West Point for Easter. Mike Noone, former Dean of Catholic University's Law School, was at West Point for the semester to write the new law text for the academy. His wife, Ann, was teaching the Cadet Cooking Class while they were there. (The Noone's were my parents Air Force friends they were stationed with in both Alabama and England and were my second family in DC when I was in college. Ann Noone is one of my cooking mentors and I learned so much about formal service and entertaining from her as well as how to be a great cook). I had been quite vocal about never wanting to go on another blind date in my life, so Ann never mentioned that she had arranged one. She just invited me to go to a watch a West Point Lacrosse game. I told her I wanted to stay inside and read. After quite some urging from Ann, I realized I was being rude to my hostess and finally said I would go with her. While we were at the Lacrosse game she said "I think there might be a Cadet from my cooking class coming by to give you a tour of West Point" and I looked down as these two cute boys came walking in. So Jason Brocke and Todd Wasmund came and sat next to me. I asked Jason where he was from and he said "Indiana." So I asked him if he liked basketball and John Cougar Mellencamp and you can be sure the answer was "yes." That night we watched the Final Four basketball tournament between Duke and UNLV. One of our first dates was at the CIA (Culinary Institue of America). Six weeks later we were sitting on the wall of Catholic Chapel overlooking the Hudson River and Jason said "I have this really sick feeling in my stomach that I'm going to marry you." He's always one to be honest! That will be 19 years ago in March. We always laugh that food brought us together and he is the only guy I ever dated who could eat more than me.

So I married a boy from Indiana and now we go to Indiana at least twice a year. We spend every other Christmas there and then either a summer visit or a visit scheduled around Grand Bette's 90th birthday or Marianne's 60th or Jim's 60th or Jennifer's wedding or Jon's wedding or a Notre Dame Game. Because we go at all different times of year my girls have had the benefit of experiencing the changes in season that we didn't experience in Hawaii or California. They always hope it will be snowing when we go in December. And I seem to continually have Indiana/California connections. I cook from the Simon's who are from Indiana. We stopped at the Triple XXX family restaurant in West Layfayette and it turns out the owner's wife is from Ventura. There always seems to a new connection.

I wrote on Facebook some of my favorite Indiana food's that I ate along the way, but I thought I should also mention a few here now. The most famous restaurant in Indianapolis is St. Elmo's. (I think Herb copied the menu and atmosphere when he created Lucky's in Montecito. St. Elmo's and Lucky's have a similar feel and very similar menu!) It would be impossible for me not to mention Shapiro's because they have the best Corned Beef in the entire country and is a must on our list every time we visit. I order the Corned Beef on Rye and Jason orders the Reuben. We went to Hollyhock Hill for Jennifer and Jim's rehearsal dinner. We get Elk Burger's from Bub's. This year we went to the State Fair for the first time and that will have to be its own separate post. Talk about some amazing Fair food!

Indiana is as famous for it's corn as it's basketball. The corn is high in August in Indiana. We went to the Carmel Farmer's market and bought a variety of corn called "Peaches and Cream" that is both white and yellow corn on the same ear. Lori McDonough bought another sweet variety called "Bread and Butter" that they also have at the Farmer's Market. So I'll end with a recipe for Classic Creamed Corn. If you've never made your own before, August is the time to do it!

Be forgiving on the measurements folks. I usually like to make a giant batch, but I'm trying to make one that is workable for a home kitchen. So adjust amounts to your liking. You are basically just cutting the corn off the cob, sauteing it and then adding some cream or milk. You don't really need to measure that. I personally don't like thickeners so I don't add any flour.

2 cups FRESH corn, (that you cut off the cob yourself)
2 tablespoons of butter
a little olive oil, optional. I just often saute in a mixture of olive oil and butter)
Kosher salt
1/2 cup of heavy cream or whole milk (or 2% if you only have that. Do not use non-fat!)
pepper, optional. some people like pepper on their corn and others just want to taste the sweetness of the corn, butter, salt and cream. Hot sauce can be added if you want something spicy.

1. The key to this is to use FRESH CORN that you just bought! Try not to buy anything in a plastic package. You want to shuck this yourself. The starch in corn changes from the minute you pick it, so it loses its sweetness the older it gets.

2. Shuck the corn. Then cut the kernals of the cob. You don't cut them all the way off. You kind of cut them 3/4 of the way, so the bottom is left on the ear and the "milk" inside the corn can get out. Then you scrape the cob with the back of a spoon or knife to get the rest of the "milk" out. (I use the leftover cobs as seasoning for bacon corn chowder, but that is another recipe...)

3. Heat the largest saute (frying pan) that you own. Get it nice and hot. Melt the butter and olive oil together. Add the corn kernals to the hot pan. Sprinkle with salt and saute. (flip and stir around)

4. Add the cream or milk and cook, stirring frequently, down to desired thickness. Serve hot. (I also remember someone in Dothan, Alabama making her creamed corn in the microwave. I've never done it, but I'll tell you her creamed corn was excellent.)

I also have a Baked Corn Souffle recipe that I will send as well as Corn Cakes and Arepas. I just love summer corn! (And it is was Max and Day's anniversary on August 15th!! Happy Anniversary! I need to send the the bacon, corn heirloom and mint succotash that I made for their wedding. August is just the perfect time for all of this corn!!!!)

Sherrie Petersen said…
"I have this really sick feeling in my stomach that I'm going to marry you." That is just hilarious!!

Anonymous said…
This comment has been removed by a blog administrator.
December 30, 2009 at 11:14 PM