People fall into our lives in such twisting paths and turns.  This past May my father, Paul Halme, was given an honorary doctorate from Finlandia University and went to Hancock, Michigan to speak at the graduation.  (You can imagine how many jokes are made about a school also known as FU.)  My mother of course was sitting in the audience and was introduced as the owner of the Solvang Bakery with some kind words about her accomplishments.

As the graduation neared the end my mother was tapped on the shoulder from the woman sitting behind her.  "Do you just have a minute because I have to tell you how to make my famous Prune Butter Tarts."  And with that tap on the shoulder Norma Nominelli came into our lives.  Norma continued to tell my mother that she was just about to make a batch of the tarts and would my mother like to come over to learn how to make them.  My mother said that unfortunately they were on a tight schedule but they would be back in Michigan for Finnfest 2013 and she would love to learn then.  They exchanged contact information and my mother came home to tell me about this delightful woman she had met at the graduation.

Norma mailed us the sweetest letters along with a book she had written about having polio as a child when she was 13.   I happened to pick the book and letter up and glance through it.  It was another one of those serendipitous days for me.  I'd had had a few challenges that morning and a little sadness and yet here was this story about a little girl who disease could prevent her from ever walking again.  Yet even at a young age, Norma, has this faith and belief that "life was going to be good."  With her positive attitude she came out of the hospital a year and a half later at the age of 14 and she DID indeed walk again.  Norma's left hand doesn't work and her lower left arm is half the size of her right arm, but more about that in a minute.  Reading Norma's inspirational story that day gave me the boost and encouragement I needed.

Now we have another twist to the story:  Norma and her friend Barbara have known each other since kindergarten.  These women have been friends for 75 years.  In high school the two met, Joan, and the three have been best friends ever since.  Unbeknownst to Joan, and as a surprise for Joan's 81st birthday, her daughter Karon invited the friends to come to San Francisco for the birthday celebration.

So we get a letter from Norma saying that she never heard of Solvang in her life until the graduation and now she has been invited to California for a surprise birthday party.  And after the party they were coming to of all places:  Solvang.  So now Norma would be able to teach my mother how to make Prune Tarts.

After the wonderful surprise party pulled off by Karon (its own wonderful story) the foursome: Norma, Barbara, Joan, and Karon headed down to Solvang.  All I can say is I want this kind of energy when I'm 81.  These women are doers and Norma worked as hard and fast as my best sous-chef.  She is a burst of energy.  She runs and tight ship and made the pastries so fast that I could barely take pictures.  The miracle of it is that her left arm and hand barely work because of the polio, yet she has found a way to roll out the butter pastry dough, and finding that way to make her arm work it has actually strengthened her.  (For any of you who have made homemade butter pastry dough you know this requires some serious strength with the rolling pin.)  Norma said "I love using his poor old arm because it makes me stronger.  If I didn't use it, it would have withered."

I always say that food is healing.  That cooking is an act of love.  And in this case baking not only heals Norma but in turn she brings her famous tarts to fundraisers and bake sales as well as giving them as gifts.  She gives the recipe away with her generous heart.  It heals her and heals those she gives the food too.

The pastries baked while my mom and dad and our visitors all had lunch and visited.  It was as if we were all old friends and had known each other for years.  And I don't know if we should mention in here that we didn't really have time for lunch.  That I hadn't even showered when they showed up because I had had such a busy morning and I was trying to get Katherine to dance camp and get the things she needed and take care of the other things on my "to do" list.  Not to mention that my mom is in the process of reopening the bakery in the new location and well, our lives are more than a little busy.  But sometimes you need to make a change in the plan.  Sometimes you need to stop from the treadmill of life and deviate from your plan for the day and be open to the surprises that fall in your lap.

Norma and her friends came into our lives with a Joy you can't imagine.  As they waved goodbye to us in the car, Joan, shows us this wonderful red, white and blue giant pinwheel that they GAVE to her at the hardware store in Solvang.  They loved our little local hardware store.  It was goodness all around and paying it forward in the best way.

And as I talked to Norma about my life she said: "I'm telling you, it's going to be good!"  And your life will be too! 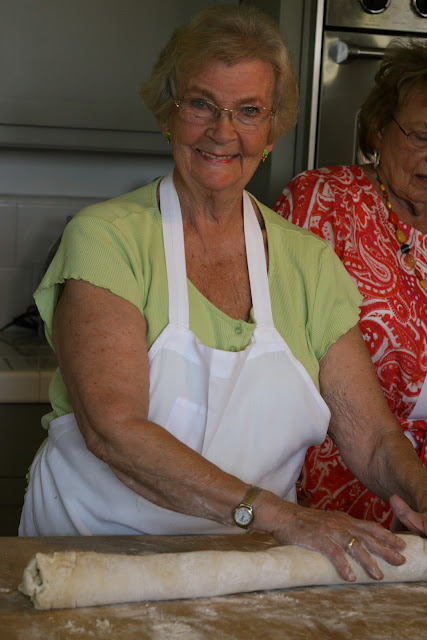 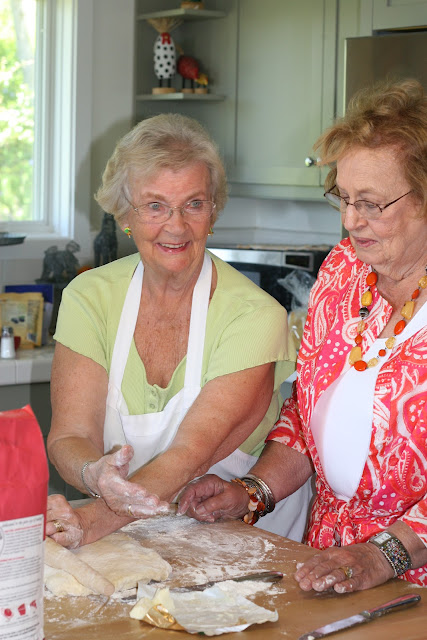 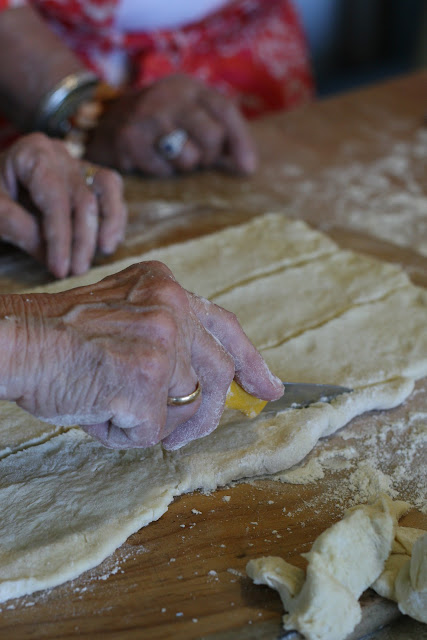 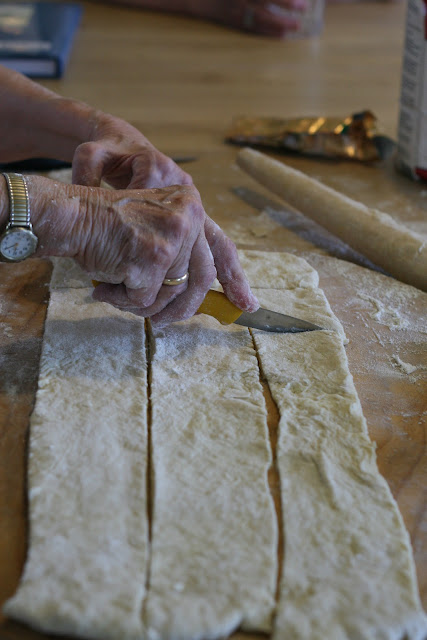 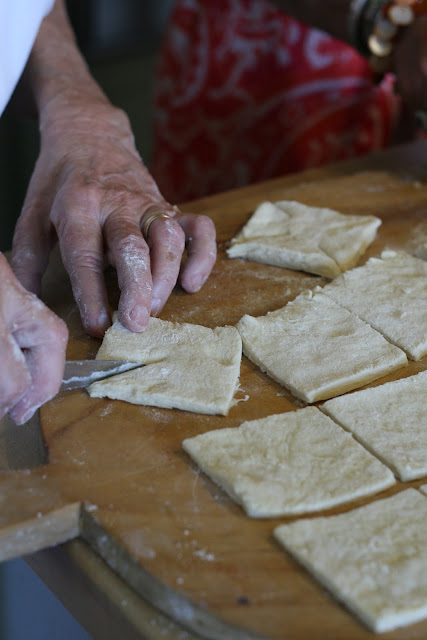 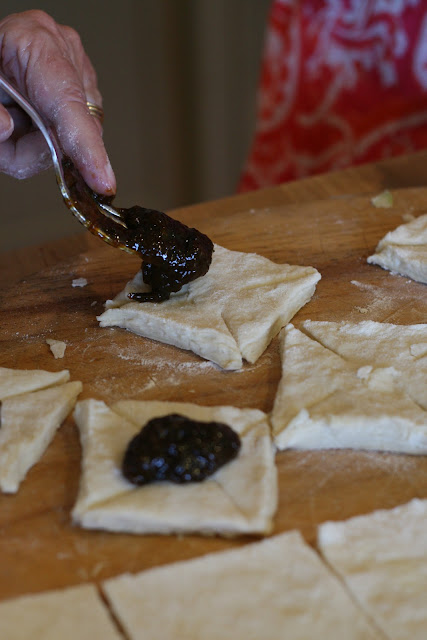 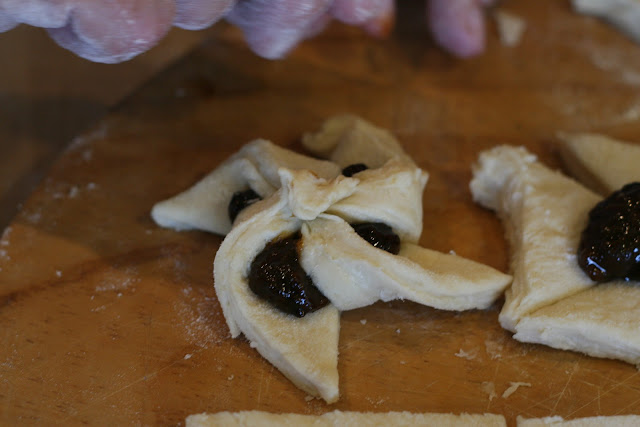 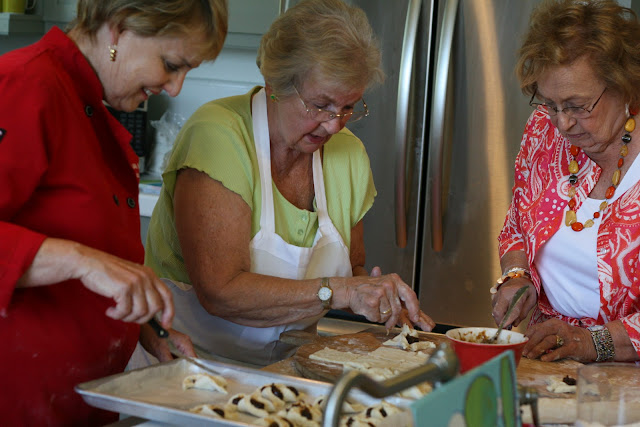 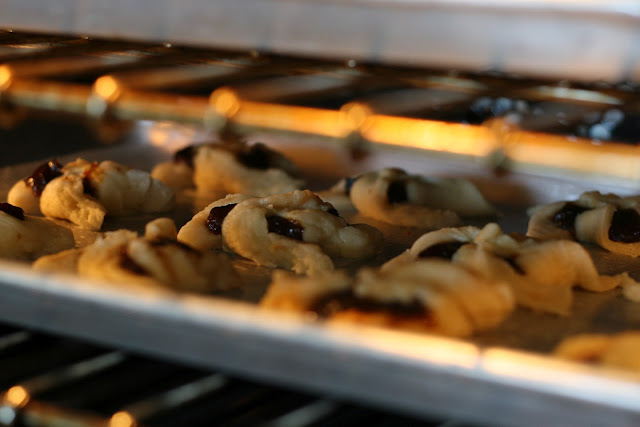 The flaky Finnish butter tarts are so popular at bake sales.


Make the Prune filling and have it cooled before you make the dough.  The prince filling can be made days in advance.


Into 5 cups of all-purpose flour, cut in a 1/2-cup lard.  Add enough cold water to form dough to roll out, but stiff.  (About 1 1/2 cups cold water.)  Like pie crust.  Roll out on well-floured board to 1/2-inch thickness.  Using a pound of salted butter (oleo won't do), spread half the dough with butter;  fold over and roll out again to about the size of a pastry sheet.  Note:  the butter should be about the same consistency as the dough, not too soft, not too hard.    Roll, spread butter over half, fold and roll again until all of the butter is gone.  On last rolling, starting from the longest end of the rectangular dough, roll up like a jelly roll;  cut in half (see all the butter layers?) and chill 30 minutes in refrigerator.  (If I'm in a hustle I put it in the freezer for a few minutes.)  This chilling is because the butter stays in layers, rather than oozing out on the rolling surface.  You may flour liberally, rather than have the dough stick to the surface.

Taking one half of the refrigerated dough, roll to 1/4-inch thickness, cut into squares of your desired size.  Cut corners of square of each squre on the diagonal leaving the center in tact.  Place dollop of prune filling (recipe below) in the center.  Take one tip and fold toward the center, go in the same direction alternating folding every other tip and bringing it to the center.  Pinch and twist all points at center over prune filling.

Bake at 375 degrees for 20-30 minutes until lightly browned.  Alternately, you may freeze unbaked pastry raw on cookie sheets and when frozen place then in plastic bags so they are ready to bake at any time.  Take out the frozen pastry and bake as above.  They may take an additional 15 minutes if frozen.

For the Prune Filling:
Take 1-pound pitted prunes, cover with water and boil until soft.  Drain.  Mash with a potato masher in a saucepan;  add 1 cup sugar, 1 teaspoon vanilla and return to stove and heat until the consistency of jam.  Cool.


Maili's Notes:  Lard makes a very flaky crust.  Butter can be substituted for those who do not care to use lard.  Also note that Norma uses salted butter instead of unsalted butter so there is no need for additional salt in the pastry recipe.
Email Post
Labels: Dried Plum Tarts Finlandia University Finnish Prune Tarts Norma Nominelli

Anonymous said…
Love the story! I wondered who "Norma" on the calendar was...and couldn't remember to ask. Today I found out and also read your marvelous written version Maili! Thanks
June 12, 2012 at 1:06 PM

Kristiina said…
I am half Finnish and I absolutely love stumbling upon Finnish recipes. These look amazing and I was really touched by Norma's story...so inspirational! I have plans to make these this upcoming Saturday. Just one quick question...when you take the jelly rolled dough out from the fridge after the 30 mins chilling, do you unroll it and then roll it out or leave it rolled up and roll it out.

CandyG said…
Kiitos paljon! I have known Norma Nominelli nearly my entire life and she has always had that distinctive twinkle in her eye and big smile! She is a tireless champion for Finlandia University, the city of Hancock and Finns everywhere! Jumala siunatkoon teitä, Norma!
October 8, 2015 at 4:13 PM