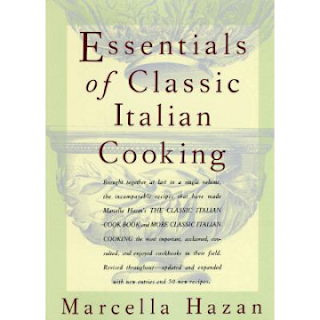 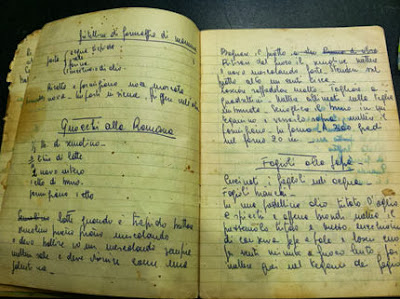 Marcella Hazan's notebook of the recipes her mother dictated to her 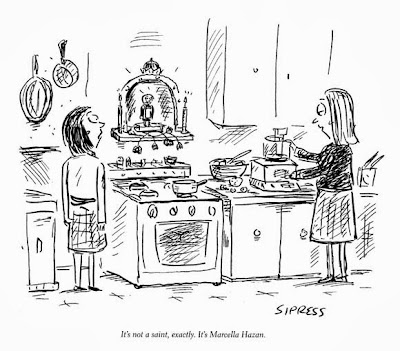 "It's not a saint, exactly, it's Marcella Hazan."
by cartoonist David Sipress

Last week I was putting up my recipe for Lentil Salad and I was surprised I had never posted my lentil soup recipe (note that I mistakingly said "my" lentil soup recipe.)   I'd almost forgotten it was Hazan's because I'd made it so many times that it felt like it was my recipe and a part of me.  But that is the difference between a good cook and a good teacher.  A good teacher can truly pass on the technique and actually give the student the skill to make the recipe their own.  That is what Hazan did.  She explained in a simple and straightforward way how to make truly delicious Italian food.  The recipe became a part of you after you made it.  It became part of your signature family recipes. The lentil soup recipe was the first recipe that ever made using lentils and how I even learned what they were in the first place.  Only a few days ago, I received the sad news that Marcella Hazan had passed away.  I didn't realize then that her recipe would now become another part of her legacy,  All I was thinking about it that it is fall and that it is time to make Marcella Hazan's delicious Lentil Soup.

Marcella Hazan was the Julia Child of Italian Cooking.  Some say she was more than that:  "She was a true expression of her culture, a dedicated expert in her craft and a first rate cook."  Others said "the Tomato Sauce alone was worth the price of the book."  Her Tomato Sauce is ridiculously simple and addictively delicious with only four ingredients:  tomato, onion, butter and salt.  It has been copied so many times some are unaware that Hazan is the original source.

I've now read multiple tributes to Marcella Hazan and I've tried to include the various links each time I've mentioned her name.  I had to quote the below from David Sipress on how Marcella Hazan Changed My Life ,the cartoonist that created the above Marcella cartoon for Gastronomica magazine, because he sums up the same thing we all keep echoing about Hazan.  And that is when you realize how many peoples' cooking skills were changed because of one person.

"What I needed was a teacher. And I found mine in Marcella’s The Essentials of Classic Italian Cooking. All I had to do was follow her instructions to the letter, and success was pretty much guaranteed. If you’ve ever seen Marcella on television, you know that she was a short, compact lady, a tough biscotti with a raspy voice who didn’t suffer fools gladly and had a surprising preference for Jack Daniels over a glass of wine. But in her books her voice is always warm and encouraging. This, and the fact that her recipes are consistently clear and straightforward, enabled me to overcome a lifetime of insecurity in the kitchen. She just made it all seem so easy. For example, there is her classic tomato sauce with onion and butter, her gift to the beginner Italian cook and the first thing I made from the book. She begins the recipe by saying, “This is the simplest of all sauces to make, and none has a purer, more irresistibly tomato taste. I have known people to skip the pasta and eat the sauce directly out of the pot with a spoon.” All you do is put the tomatoes in the pan, add a medium-sized onion cut in half and the butter, and simmer for forty-five minutes.
It also helped that she has precise rules—only use the best olive oil, do not put salt in youraio e oio until you toss it at the end, never cook a tomato sauce in a covered pan, or it will end up being “bland, steamed, weakly formulaic.” I do well with rules."  -David Sipress


Hazan is known for saying that using too much garlic is "the single greatest cause of failure in would-be Italian cooking."  Judith Jones, who was both Hazan's editor and Julia Child's editor, argued with Hazan that it was superfluous to put both oil and butter in one recipe.  Hazan held fast that it made a difference to the taste of of the dish and forced Judith Jones to test the recipe both ways.  In the end, Jones agreed that Hazan was right.

Here is the the video of Marcella being interviewed by Mark Bittman on writing her first cookbook.  She said "no, she would not write the cookbook" because she couldn't write in English.  Thankfully her husband said he would translate the recipes for her.

Hazan passed away on September 29, 2013 and will be greatly missed, but her legacy of recipes will be passed on and be a part of us forever.

MARCELLA HAZAN'S LENTIL SOUP
Maili's Note:  I was given this recipe by my landlady in Washington, DC, Barbara Keeling.  Barbara always doubled the recipe so I did too.  It freezes well and makes incredible leftovers.  I always served it with cheese toast and a salad.

1.  Put 2 tablespoons of the butter and all of the oil in a soup pot, add the chopped onion and prosciutto and turn on the heat to medium high.  Do not cover the pot.  Cooke the onion, stirring it, until it becomes a deep gold.

2.  Add the chopped carrot and celery.  Cook at a lively heat for 2 or 4 minutes, stirring occasionally.

3.  Add the tomatoes with their juice, and adjust the heat so that they bubble gently, but steadily.  Cook for about 25 minutes, stirring occasionally.

4.  In the meantime, wash the lentils in cold water and drain them.  Add the lentils to the pot, stirring throughly to coat them well, then add the broth, water a pinch of salt and pepper.Cover the pot, adjust the heat so that the soup cooks at a steady, gently simmer, and stir from time to time.  Generally, it will take about 45 minutes for the lentils to become tender, but each lot of lentils varies, so it is necessary to monitor their progress by tasting them.  Some lentils will absorb more liquid than others.  If necessary, add more broth while cooking or, if you are not using homemade broth, add water.

5.  When the lentils are done, before turning off the hat, add the remaining tablespoon of butter and swirl in the grated Parmesan.  Taste and correct for salt and pepper.  Serve with additional grated Parmesan for the table.

Maili Halme said…
My friend, Molly, sent me a list of her favorite recipes with the page numbers from Marcella's book.

This is a beautiful tribute that you wrote to Marcella Hazan. I didn't know that you had and used her cookbooks. (Although I should have inferred that from a conversation we once had about how many cookbooks you have!) My mother, who is an unbelievable Italian cook, gave me Marcella's Essentials book many years ago. Some of our favorites are the tomato sauce, carbonara, pork loin in milk to name a few.

In the NY TImes a few days ago there were some photos of her, one that was taken on the first date with her husband in Cesenatico, in Emilia Romagna. That's really close to where my relatives come from in Italy, so the recipes in the Essentials book are mainly from the same region of Italy that my heritage is from. It is a special book to me... essentially my Italian food bible, but I had no idea how revered she was and still is.

Carol William said…
When it comes to caviar and fine foods, there are a lot of places that you can get caviar, only at our store you can find the wolrds finest caviar.
December 11, 2019 at 2:49 AM 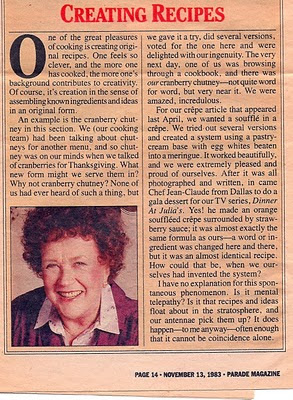