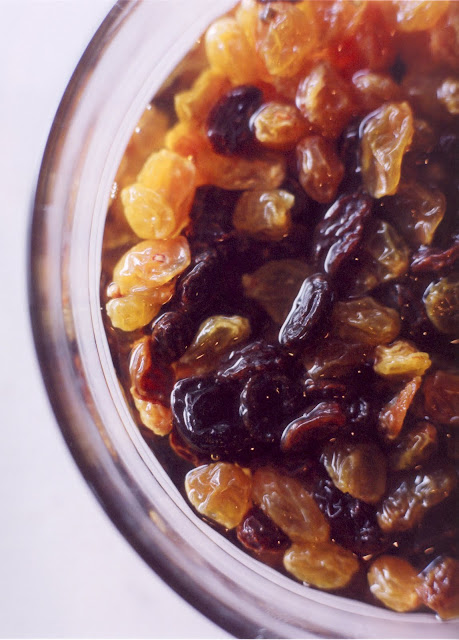 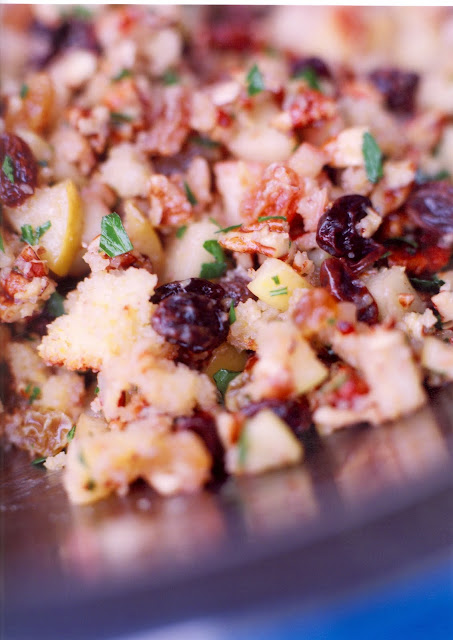 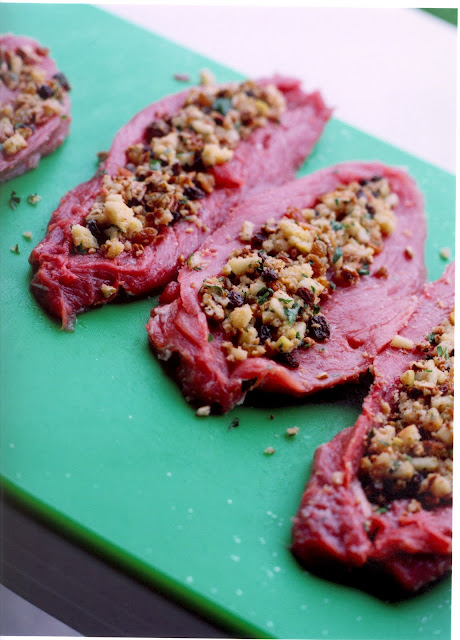 photography Elizabeth Messina
pork before it is trussed 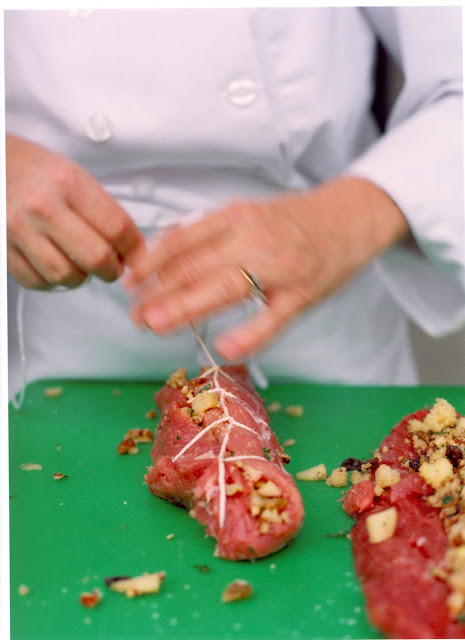 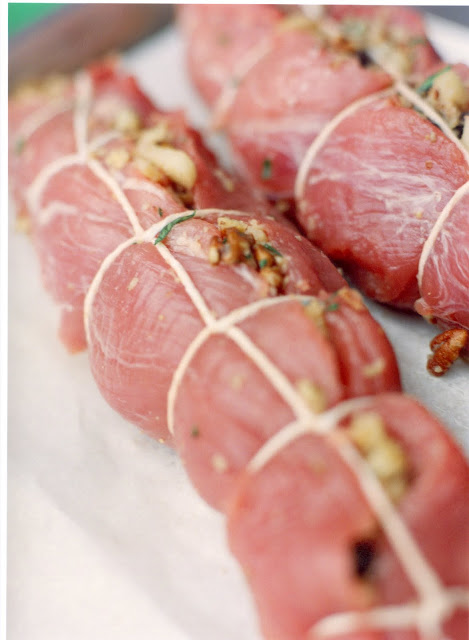 This is one of those things that is just delicious. Every single element of it is fabulous on their own, but combined they are exceptional. I keep trying to figure out how to make this easier for the home cook. This recipe has been tested four times, but I'm still looking for feedback from you on how to make the descriptions and steps more clear. So please ask questions or make comments. This isn't a quick and easy recipe and perhaps more for the advanced cook, but it is one of those things that is worth the time. If you do want to take a short-cut than don't stuff the pork. Just make the pork by itself and serve the stuffing on the side. (Jason wanted extra stuffing anyway!) But instead of looking at this as work think of it like this: Fall is here with it's wonderful crisp and cool weather, what is more comforting than turning on a warm stove and baking bread and sautéing apples and roasted pecans. This is what you call satisfying work. (But if you have picky kids they may pop your balloon of happiness, like mine did when they wanted the pork PLAIN without the stuffing!) Thankfully, other kids and other adults thought this was about the best thing ever. My neighbors, Rob and Kelly, haven't been able to stop talking it since I brought the test batch over. And the sauce is exceptional. I'm making a short intro story here because the recipe is fairly long. I'm especially proud of this because, like the dates and some of my other best recipes, this one just came right out of my head. There wasn't a recipe to adapt or change. This was just some flavors that I thought would be really yummy together. My grandmother did tell me, when I told her I first made it, that she always soaked her raisins in brandy. So that part I got from her. For those of you who don't want to cook with alcohol you can soak the raisins in apple cider. (you may also be able to sub apple cider for the wine in the beurre blanc. I haven't tried that before, but I think it might work.)

Make the cornbread. You'll only need about half the pan of bread. I'm writing this first because the recipe will be easier if you start with this step. (look up Auntie Colleen's Cornbread on the right side of the blog.)

1. Make the cornbread if you haven't already. Soak the golden raisins and regular raisin in a bowl with the brandy and set aside.

2. Roast the pecans. Every oven size is different. In the toaster oven it is different from the large oven. In general, 350 for about 8 minutes is right. But in a smaller oven they may burn more quickly. Keep an eye on them. They are done when they smell right. But as soon as they start to smell right then are a few seconds from about to be burned. So keep an eye on them. Since I'm famous for burning nuts (the downside of multi-tasting) I recommend buying twice the amount you need so that you still have extra after you burn the first batch.

3. Get a large bowl out and put water and two lemons in it. This will keep the apples from turning brown as you peel and dice them. Peel and slice and large dice the apples. If you want you can leave the skin on. Your choice. Put them in the lemon water after you slice them.

4. In a large saute pan, over medium-high heat, saute the onions in the 2 tablespoons of butter and 1 tablespoon of canola oil. Put a pinch of kosher salt or sea salt on the onions. Saute for about 2-3 minutes.

5. Drain the apples from the water and add apples to the saute pan. Cook apples for about 2 minutes. Add 2 tablspoons dark or light brown sugar. Add another pinch of salt. Cook for another minute.

6. Drain the raisins, but save the brandy. You will need it later for the sauce. Combine everything in one large bowl: cornbread, pecans, apples and onions, raisins, chopped parsley. Set stuffing aside.

7. Get the pork tenderloins. Trim silverskin and fat. Now you're going to butterfly them. It is kind of like making the second two swipes in the z from Zoro. You go in at a 35 degree angle, then flip it over and go slice straight across. I wish I could draw a picture on the blog. It's not that hard. It sounds harder than it is. (Skip this part if you just want to put the stuffing on the side).

8. After the pork is butterflied, season well on both sides with olive oil and kosher salt. Put the stuffing in the butterflied pork.

9. Tie it up. I feel like I need a diagram for this too. If you know how to knit it is similar to casting-on. If you don't knit it is just a slip knot. I'm attaching a youtube video until I can make my own. Only you can't flip the meat on it's end like she does. You need to keep it flat and just gently slide the string under it or the stuffing will all fall out. http://www.youtube.com/watch?v=uqZm9Q2G_R8 This is one of those things like riding a bike. Once you learn how it isn't hard at all. You just kind of need someone to show you and get the feel of it.

11. If you want to take the easy route just put it all in the oven. Start the oven on 400 for 10 minutes. Then turn it down to 375 and cook for 20 minutes more. Remember pork should be a little pink. Trichinosis hasn't been a problem since the 70's and even if it was still a problem all of it is killed at 135 degrees. So there really isn't a need to overcook the pork and dry it out and make it taste like leather.

12. So since I often don't take the easy route and just take the best tasting route, I decided to sear it on the grill and then finish it in the oven. You can hold it for quite awhile under aluminum foil until you are ready to serve it.

1/2 cup apple cider vinegar
1 cup sweet or dry white wine (I've used both and they both work in this recipe, tell me if you need names)
1/2 cup apple cider
1 tablespoon minced shallot or onion (I often don't have shallots so i just use onions)
1/2 cup heavy cream.
2 sticks unsalted butter (or 3 if you'd like a little more:-) cut into 1 tablespoon pieces
2 tablespoon of brandy leftover from raisins
1/4 teaspoon kosher salt

1. In a saucepan over medium high heat, put the apple cider vinegar, the white wine, the apple cider and the shallot or onion. Reduce it all the way down. The French term is a sec. You're basically going to let it cook all the way down until there is a thin layer at the bottom of the pan and the bubbles are kind of big and slow instead of little and fast.

2. Add a half cup heavy cream and reduce by half.

3. Once you have reduced the liquid then start whisking in the butter. You have to do this one tablespoon at a time. You don't just want melted butter, you want it to emulsify into the sauce. Having the cream in the sauce will already help stabilize it. But add the tablespoons of butter one at a time whisking constantly until they are incorporated.

4. Add the brandy and salt. Serve. It will hold for a few hours, but be sure to keep whisking it and checking on it. Whisk while reheating just before service.

Anonymous said…
Your blog keeps getting better and better! Your older articles are not as good as newer ones you have a lot more creativity and originality now keep it up!
January 6, 2010 at 9:13 AM