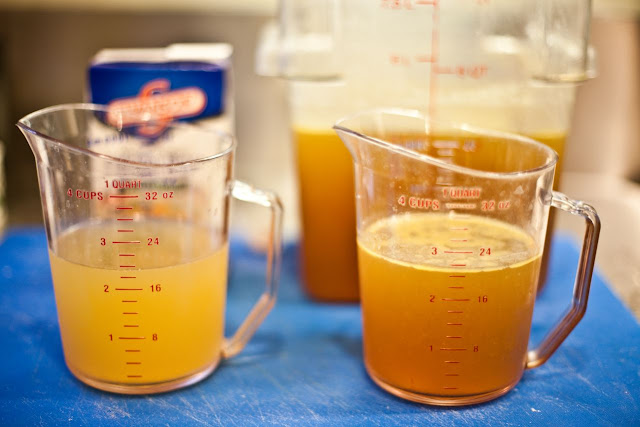 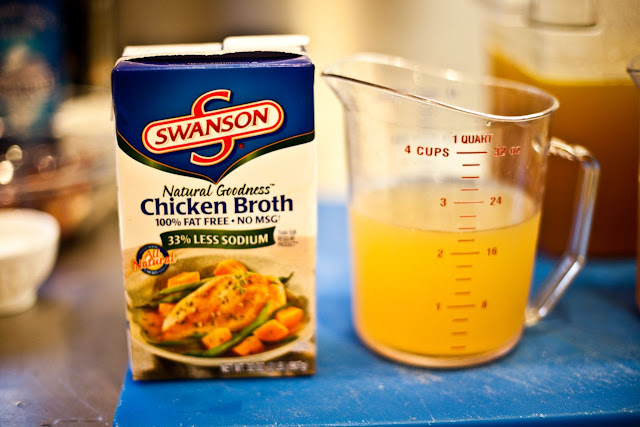 photography Amy Albertson
Even though most of my professional chef peers all use homemade
chicken stock like I do, we also all agree that Swanson's Natural Goodness
is the best commercially prepared brand. Be sure to get the one that says
33% less sodium because it doesn't contain MSG.

I first had this soup at the Farmer’s Market when we lived in Blandon, Pennsylvania. I was addicted to it and bought it every week. There was something in the broth that was so so good but I couldn't figure out what it was and was determined to learn the secret. After much examination I realized that the secret is the tiny tiny pieces of minced up chicken that float in the bottom and give the soup so much extra flavor. If you don’t have time to make your own stock, then you can use Swanson’s Natural Goodness that doesn’t have any MSG. However, the whole point is that if you make a roast chicken, you can eat it for dinner, make chicken salad with the leftovers and mince some up for the soup that you make with the leftover bones. If this all sounds like too much work for one night of cooking, then freeze the bones from your roast chicken and make the soup later. Maili

1. In a large bowl mix ground pork, sea salt, parsley, oregano, black pepper, egg and breadcrumbs. Gather about a teaspoon of the mixture and gently roll into a meatball.Place finished meatballs on a lined baking sheet and refrigerate.


3. To finish add swiss chard check seasoning and serve.
Notes from Maili: Whenever I make soup I make the largest pot I can. That way, after going to the effort you have plenty for your family, and plenty to give to your friends and neighbors and then some leftover to freeze for a quick dinner a few weeks later.