The End of Gourmet 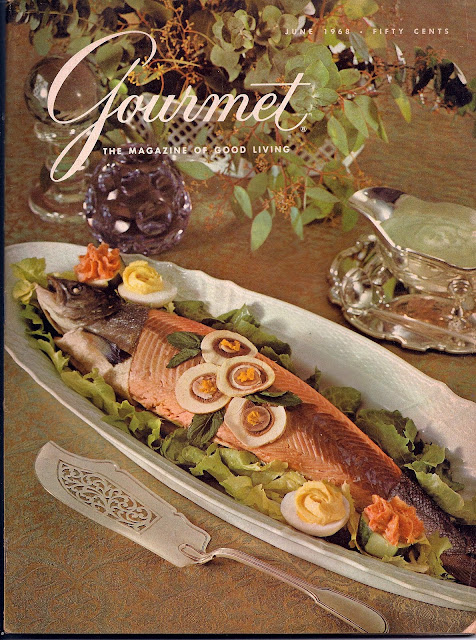 Gourmet Magazine, June 1968
The month and year that I was born
The Magazine of Good Living 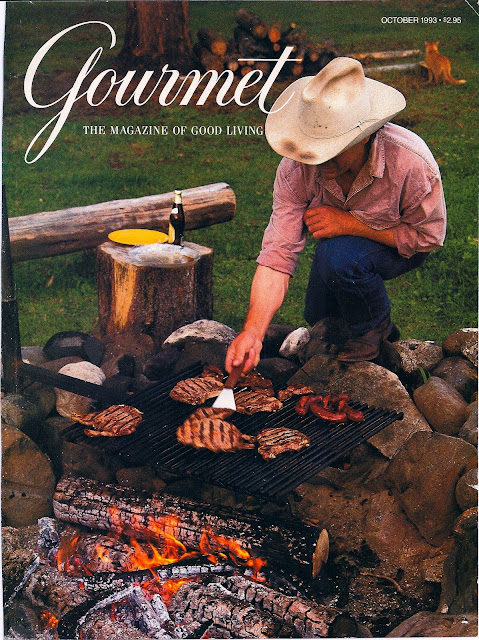 There is nothing better than the taste of food
grilled over a real fire
October, 1993 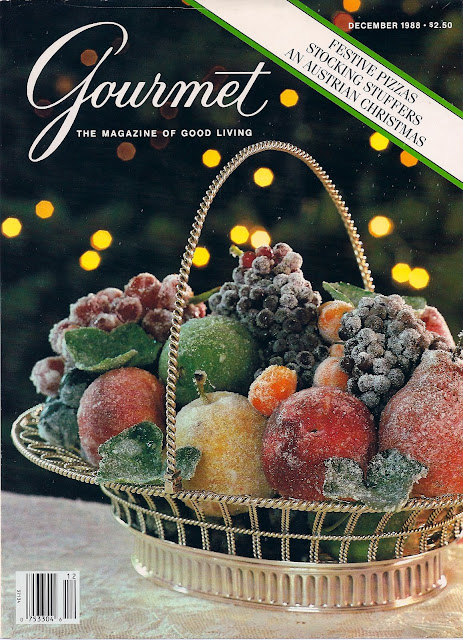 I was obsessed with making this sugared fruit.
I still make it and learned how from this cover.
December 1988 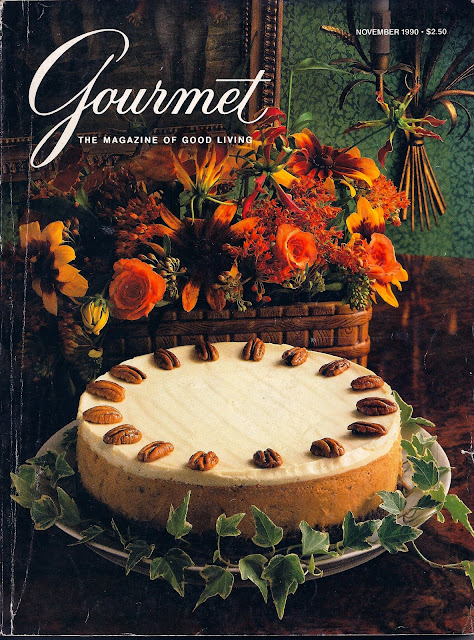 The famous Pumpkin Bourbon Cheesecake.
It became my signature dish at Thanksgiving.

I had been meaning to write about how I learned to cook from the pages of Gourmet magazine for some time now. I NEVER in a million years would guess that I would be writing this on the day after they announced the closure of the magazine. Stunned is the word I feel. Actually, I'm not stunned I'm in complete denial. I think that somehow someone made a huge mistake and that they will wake-up tomorrow and say "we've changed our minds." So the truth is that it hasn't sunk in and I really think I'm not believing it. Then on the other hand, I'm having similar feelings to the way I felt when Western Union closed. When I was in college, my parents still sent money to me via Western Union and I even received a telegram from Western Union when I got married. But as the computer age and credit card age came, Western Union was no longer needed. So it closed after years of prosperous and necessary service.

Is that same true about Gourmet magazine? Is it no longer needed? From what I understand they still retained their million readership base, but had lost 50 percent of their advertising, which made the magazine no longer profitable. And while I looked forward to my issue each month and its beautiful pictures, I realized that I often did my search for recipes on-line. Even some of the treasured Gourmet recipes that are safely secure in my white notebooks. Often I would just type their title in Epicurious's site and reprint the favorite recipe. Recently I had been watching the free full episodes of Diary of a Foodie on Gourmet.com's web site. Will the web site close as well as the magazine? I understand Epicurious.com will still be up because Bon Appetit is still standing. (Epicurious has all the recipes from both Gourmet and Bon Appetit and you can easily search for them. As you can see to the right of my blog, it is one of the recipe links I frequently use when researching a recipe.)

My grandmother had always subscribed to Gourmet and so did my mother and my aunts. It was as if all the Gourmet subscribers belonged to a private little club. I remember someone telling me how much he loved to cook. Whenever anyone tells me that I usually ask them what kinds of things they like to make. He answered "You know, Plum Glazed Turkey, things like that." I immediately answered "Cover of Gourmet 2002?" I suppose I remember Gourmet covers like a sports fanatic remembers a winning shot.

I began cooking from it's pages when I was 13. I remember having my mom drop me off at the store and asking the produce manager what a clove of garlic was. One of the first things I made when I was 13 was a leg of lamb studded with garlic. (Mind you, at this point, I'd still never made a hamburger. But a leg of lamb, no problem.) When I was old enough to drive a car, I'd go to El Rancho Market with my Gourmet in hand and ask for help in ordering and finding certain ingredients. El Rancho also had a real live butcher who could wait on you, so I could get any cut of meat or fish that I needed.

I have every issue of The Best of Gourmet books on my shelf. 2007 was the last year they published those compilations of the years best recipes. You'd think with the books I wouldn't need the magazines too, but I still bought both since the cookbooks only had the recipes and not the articles nor the travel pictures and journals. I know the Noone's have all the old magazines bound in their basement. The Noone's just moved from their home in Alexandria and I'm hoping so much they they saved all the old issues or gave them to Katie. Marianne Heilferty inherited her uncle's collection of Gourmet magazines when he passed away. She so generously gave me the one from the year and month of my birth. It meant a lot to me to have it. Much to Jason's chagrin, I have an enormous magazine collection. I try to go through them and cull out the best recipes and put them in my white notebooks. But there are some issues I just can't bare to part with and now I'm so happy I've saved them. I just got the real treasures out of a box in the attic and am so grateful they are intact. The magazines then were so big and thick. Easily twice or three times as thick as the last issue of Gourmet I just received. They were truly educational tomes on great cooking.

I'll close with two of my favorite recipes: The Pumpkin Bourbon Cheesecake became my signature Thanksgiving Dessert. The Wild Rice Salad with Dried Apricots and Cranberries also became an entertaining staple and everyone asked for that recipe as well. I usually used Lundberg's Wild Rice Blend when I made that salad.

As for my denial, I have this glimmer of hope that someone somewhere will decide to buy the rights to the magazine and the whole lot and continue publishing. And while I'm waiting for that to happen I will continue to surround myself with the stacks of Gourmet magazines I have amassed over the past 30 years. (Speaking of denial, 3 people e-mailed to tell me the news of the closure and I still had to go and read 5 different news feeds before I would even begin to believe it. I was SURE they had the wrong name and the wrong magazine!)

Then here are two of my favorites from these past 30 years:

Carrie said…
The Bourbon Pumpkin cheese cake is to die for! It will now be my signature dessert for Thanksgiving, maybe Christmas too!
December 20, 2009 at 5:45 PM