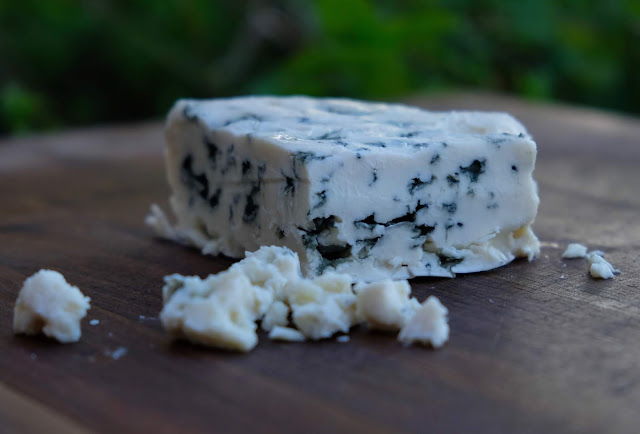 I have two secrets for blue cheese dressing.  One might be hard to guess and the second one should seem obvious.

The first secret ingredient is minced celery.  Think about how good celery is dipped in blue cheese dressing.  Well if you mince the celery and put it in the blue cheese has a crunch and dimension that most people can never guess but will say that it is the best blue cheese dressing they have ever tasted.

The second secret, that should seem obvious, is that all blue cheese is not created equal.  AVOID ANYTHING PRECRUMBLED.  There is some anti-caking powder that is put on the cheese to prevent it from sticking together and whatever that powder is or preservation measure it is not the cheese you want for your dressing.  A Sheep's Milk Roquefort is about a thousand times better than some pre-crumbled box of powdered something that may be titled blue cheese.  We had about ten blue cheese options lined-up for this and I love of course the classic French Roquefort.   I also adore:  Danish Blue, Cashel Irish Blue, Gorgonzola, Stilton, and Bleu d'Auvergne.  For American Blue a true Maytag Blue Cheese, as in from the actual Maytag Dairy Farms in Iowa has a great Cow's Milk Blue that they invented in 1938 at Iowa State University.  If it doesn't say "Maytag" it is again, not the real thing.  Another American favorite is Point Reyes Blue.  The bottom line is that you need to taste it.  If the cheese tastes delicious when you eat it, it will also taste delicious in the dressing.

There is quite a bit of flexibility in this recipe.  Sometimes I don't have sour cream on hand so I just use extra mayo and a little more buttermilk.  Sometimes I don't have buttermilk, so I use whole milk and then add extra vinegar or lemon juice to make the tanginess correct.  Some people like the taste of raw onion in their blue cheese.  I usually don't, so it is omitted from my recipe.  I love anchoivies, especially in my Caesar Dressing and I think they are also great in Blue Cheese dressing but some people don't like them so I left those out too.  I've seen Worcestershire Sauce added and that has great flavor but it also makes the dressing kind of muddy or brown and sometimes I like the creamy white color.  For those that like a little spice, cayenne or extra black pepper is an option.  If you like it less thick than use a little less mayo.  I usually never measure when I make it and just throw everything together until it tastes right to me.  But this time I did measure so I could share the recipe.  If you let it sit for an hour before you serve it the flavor develops even more.

This makes about a quart and a half.  I tried to make a home amount not a catering or restaurant version but I realize this still may be a lot for some people.  So feel free to cut the recipe in half.  The dressing will be good until the milk expires so write the expiration date of the buttermilk or whole milk you are using on the jar or container you store it in.  (I buy quart size canning jars for all my homemade dressings and sauces.)

In a large bowl, crumble the blue cheese and keep some decent size chunks.  Add the celery, mayonnaise, sour cream, and buttermilk.  Stir to combine.  Stir in the rice vinegar and minced parsley.

I usually think the mayonnaise has enough salt to make this taste good as it is, but you may add salt if you prefer more.  I often put fresh ground pepper on my salad just before I eat it so don't necessarily need it in the dressing but sometimes I put some in.

If you are in a hurry than you can serve it right away but the flavors develop if you can let it sit for at least an hour.  I keep it in an airtight canning jar in the fridge.  Be sure to note when you buttermilk or milk expires because your dressing is only good as long as the milk is.

Serve over little gems, a romaine wedge or an iceberg wedge with thick bacon and the best tomatoes you can find.