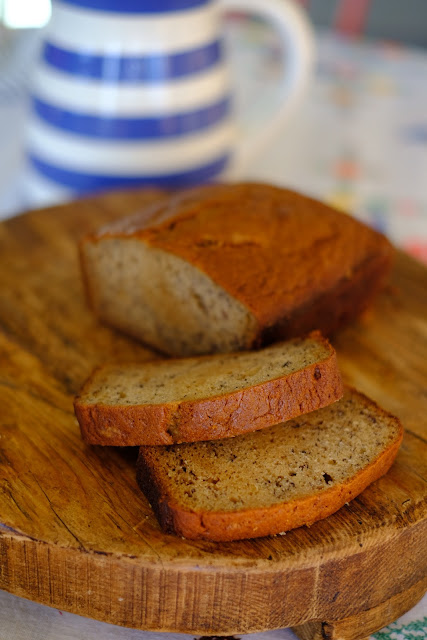 This is a very simple recipe. You can add spices or nuts or whatever you like. I just like this one because it tastes like bananas and butter. Also, don’t make the mistake of thinking more is better by adding more bananas. I did that when I first learned to make banana bread and it would never get firm in the center. I think that is most people’s first banana bread mistake. I make mine in a Kitcheaid mixer. Adapt the recipe for whatever works best for you.

2. In the bowl of an electric mixer, cream together the butter and both sugars until butter looks light and fluffy. Add eggs one at a time and beat well after each addition.

3. Combine the flour, cinnamon, baking soda and salt in a separate bowl. Mix them together so there won’t be a pocket of baking soda in your bread. Add the dry ingredient mixture a half-cup at a time to the creamed butter and sugar. Either add this while the mixer is running on low or turn the mixer back on after each addition.

4. Add the sour cream, bananas and vanilla and combine well.

5. Pour into the buttered loaf pan and bake for 1 hour or until a toothpick inserted in the center comes out clean.

Notes: A number of my recipe testers have either added oatmeal to the recipe or substituted some of the flour with oatmeal. If you wish to do this substitute one cup of oatmeal for one cup of flour.
Email Post