Halibut in Foil with Artichoke Hearts, Tomatoes and Capers 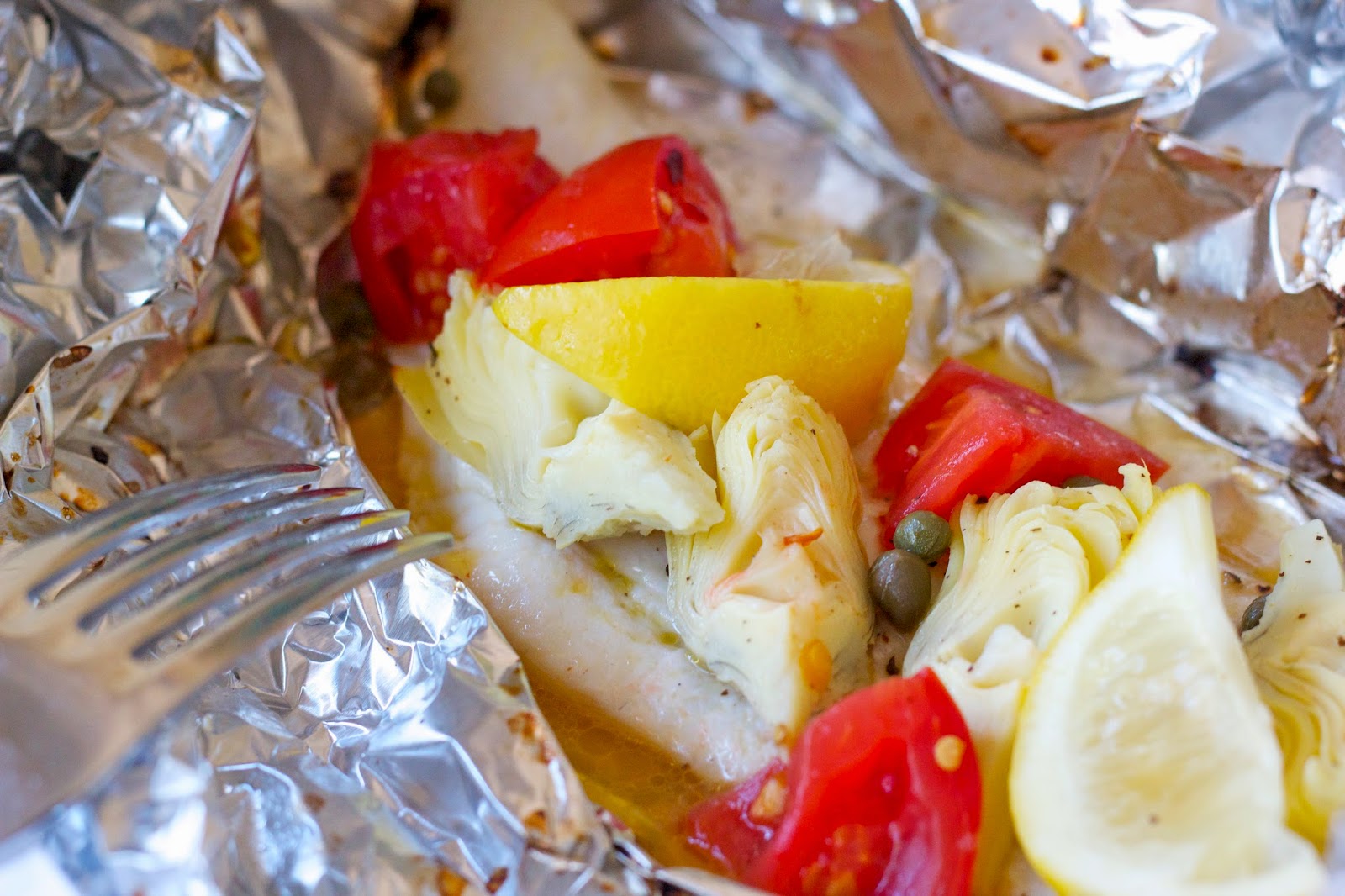 The finished fish hot off the grill.  This foolproof recipe is always moist and delicious.
All photography by Susan Silverberg 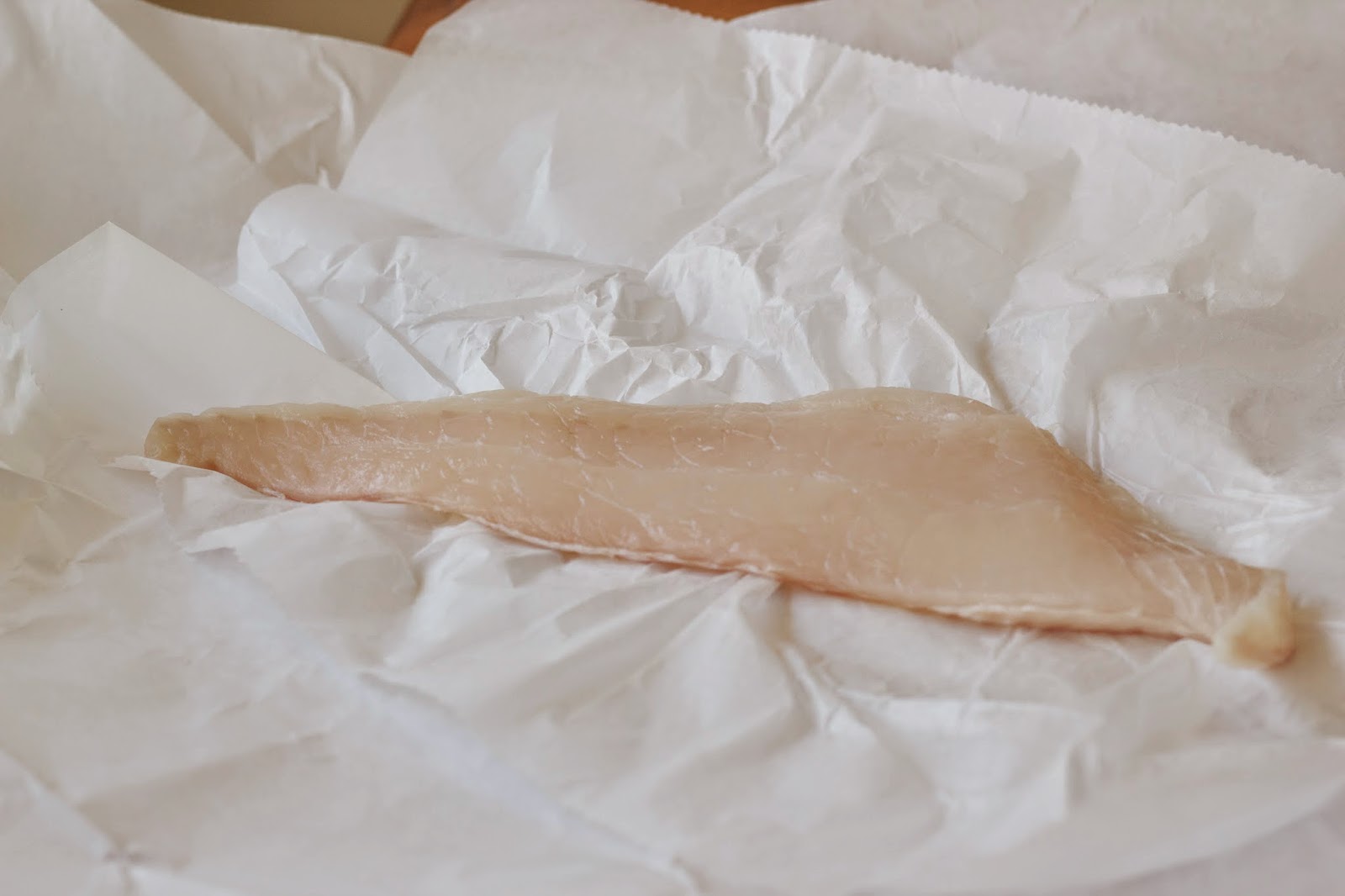 Each packet is a serving for one person.
Start with a 4-ounce piece of your favorite white fish.
You can use Grouper, Tilapia, Snapper, Branzino, or Dover Sole.
We used local Santa Barbara Halibut 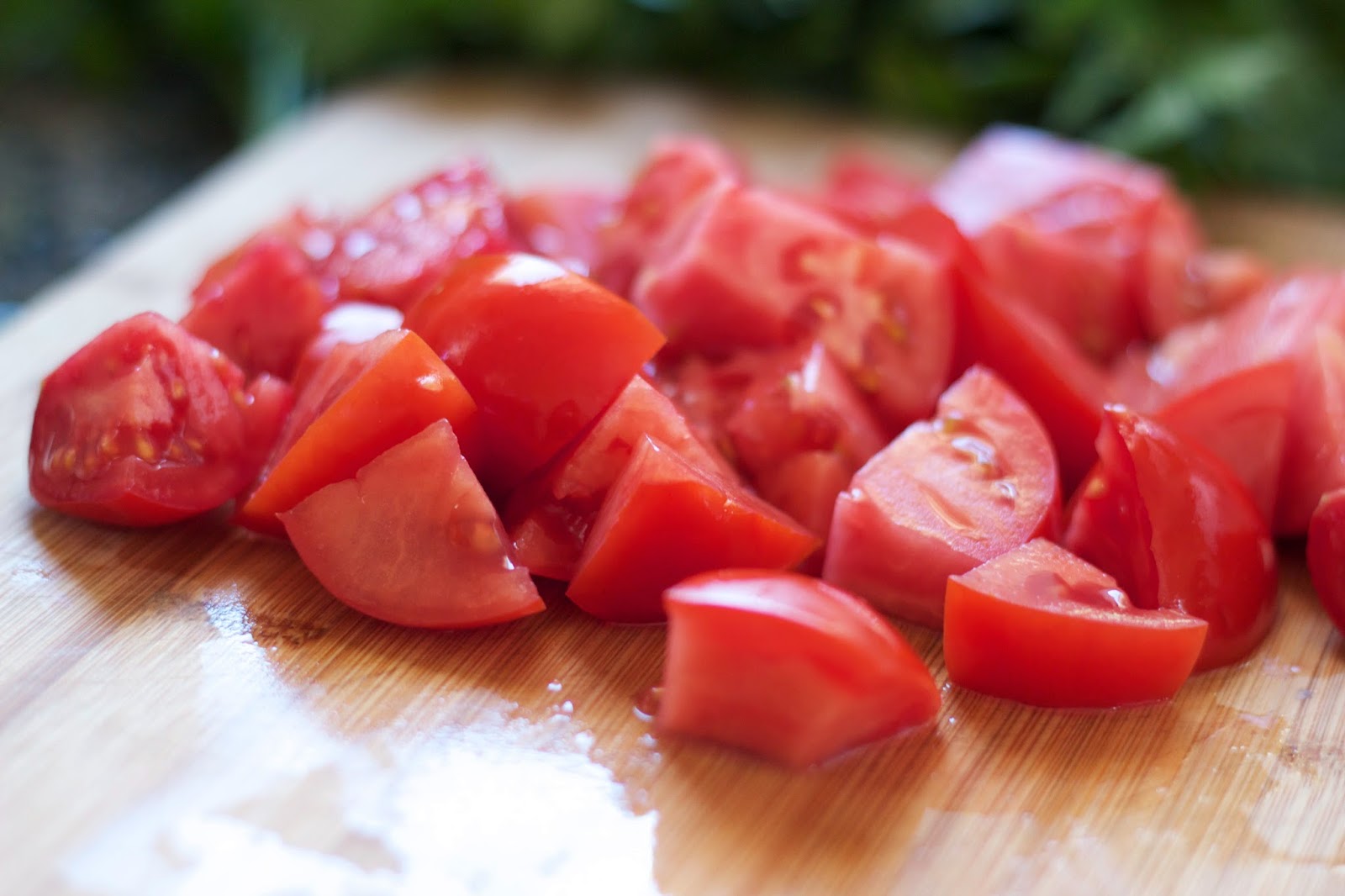 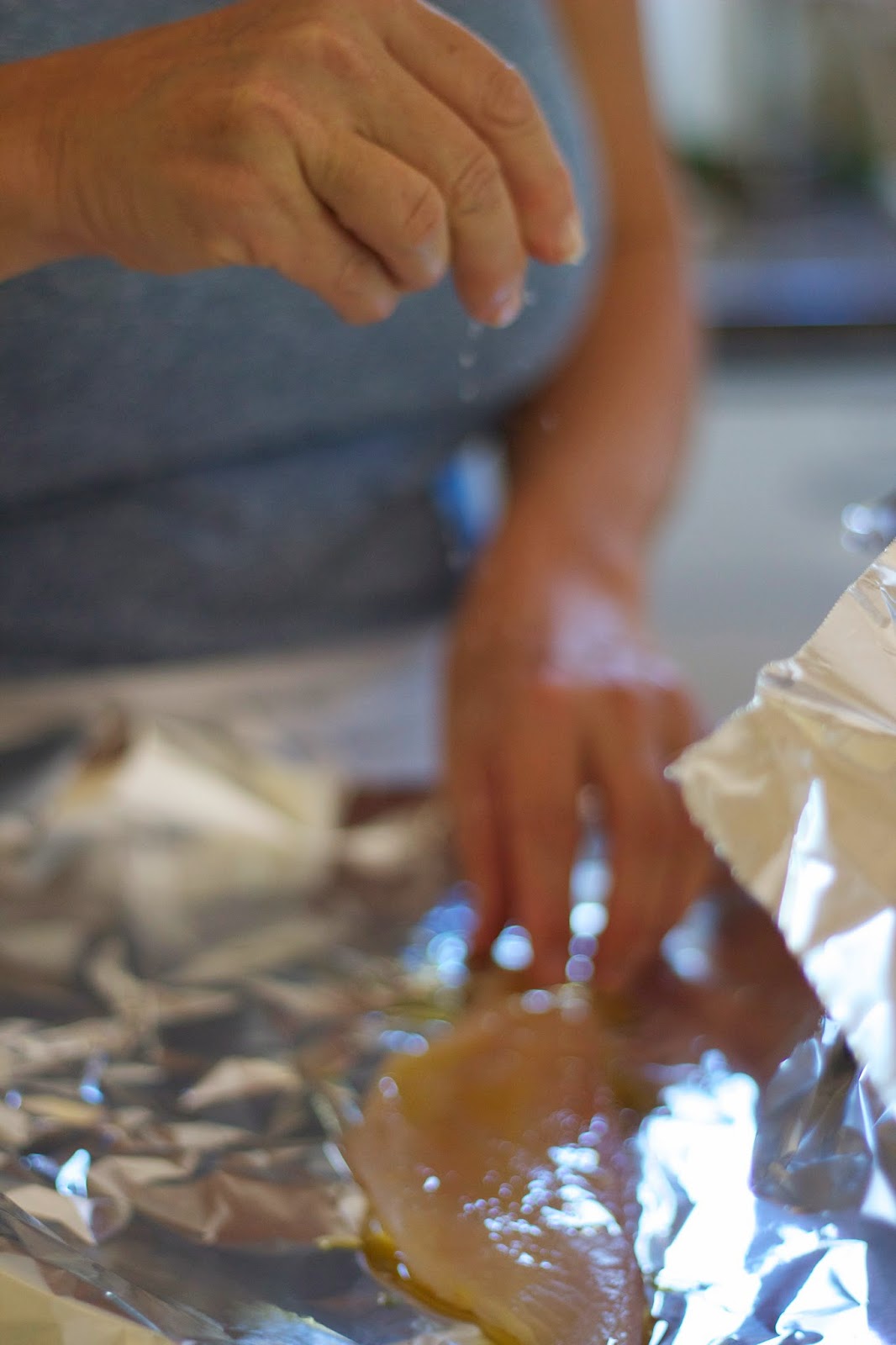 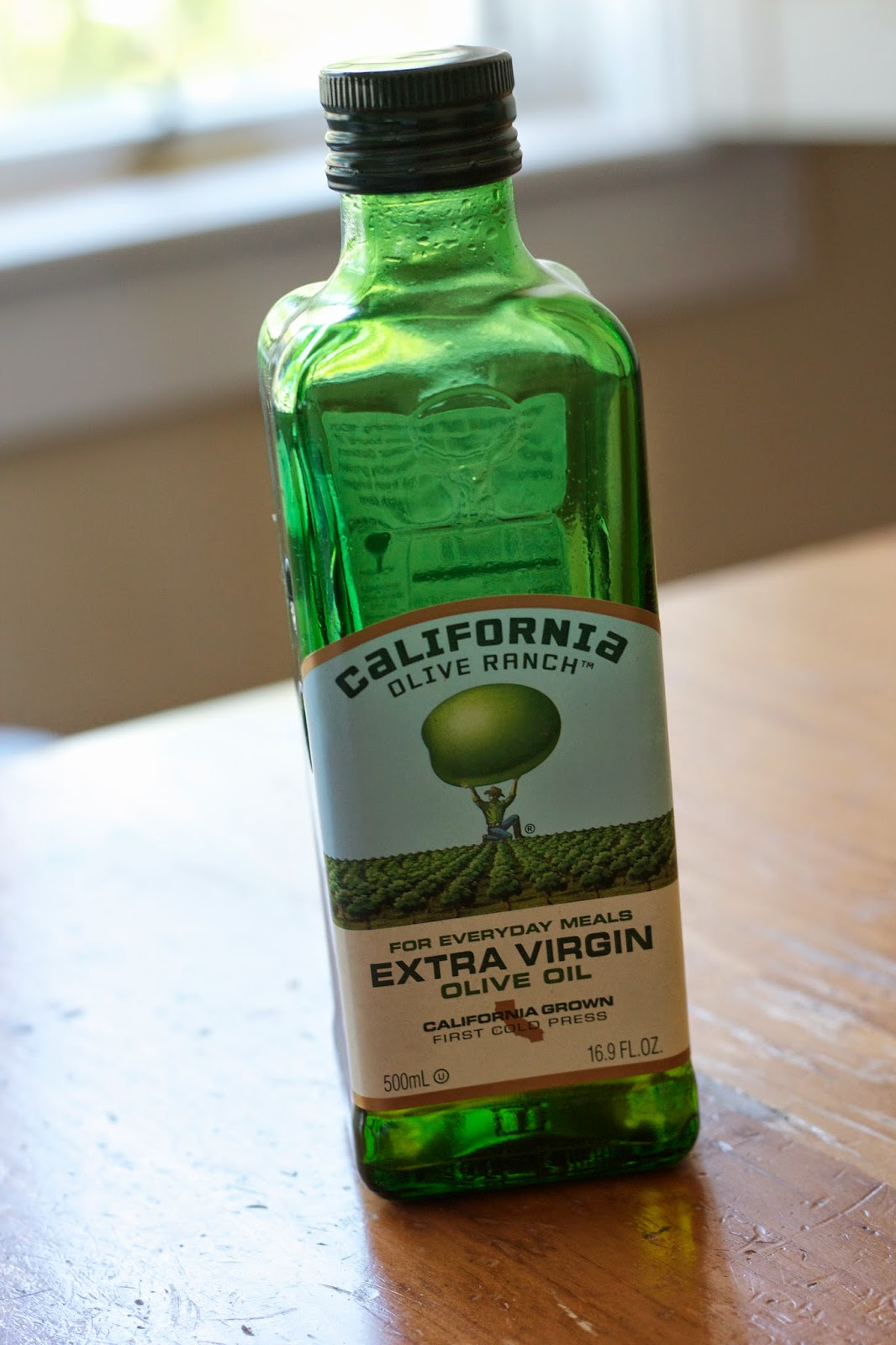 One of my favorite brands of Olive Oil
California Olive Ranch 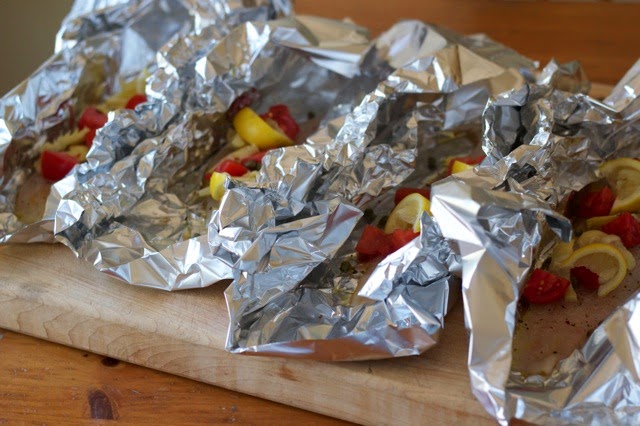 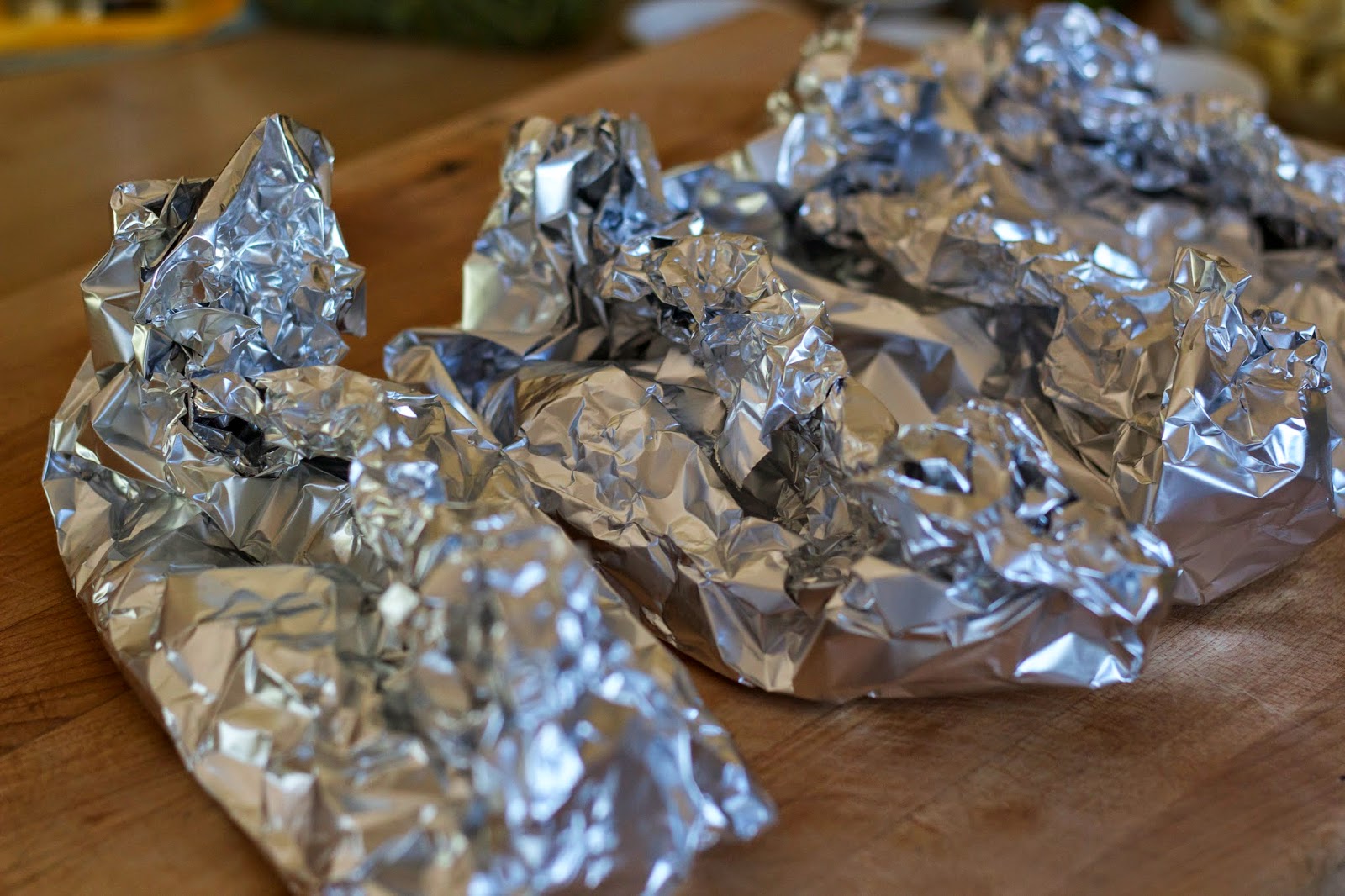 All the packets of Halibut wrapped up and ready for the grill.
You can also put a bunch of packets on a sheet tray and bake
them in the oven.

This is quite possibly one of the easiest entertaining recipes ever.  Not only can it be made in advance, but, because of the assembly line and moist cooking technique, you can easily make this for 4 or 40 people with about the same amount of effort.  Each packet is individual and can be prepped ahead of time and refrigerated or kept in a cool place until you are just about to cook it.  The fish cooks in about four or five minutes, and each packet stays warm in the foil until each guest opens it on their plate.  I always let each person open their own packet.  I've frequently done this for 12 people and they all fit on my grill at once. If you're not a big fan of grilling, this recipe works equally well in the oven.  You can do two sheet-pans full in the oven.  Some of you may have made my recipe for Tilapia in Parchment (or foil) with Creme Fraiche, but this recipe is even easier because there are no onions to sauté.

Generally, each packet takes about four or five minutes to cook.  If you have a thicker piece of fish, they may take 6 minutes to cook.  Once, Rob left them on the grill by accident and they were on there for about 12 minutes.  Thankfully, the recipe is very forgiving because they are protected by the foil. Even though the fish was falling apart in pieces from the longer cooking, it was still most and juicy.

I made this recipe to serve four because there were four of us for lunch.  It is easy to double or triple.

Maili's Tip:  Cook all fish on high to make them moist.  Cooking fish on medium heat or low heat results in dry tasteless fish.  So no matter your technique--from searing it in a hot pan to putting a whole fish under a broiler to grilling the fish directly on the grill or in the foil packets--HIGH HEAT is the secret!

4 pieces of halibut or other white fish (each piece about 4 ounces)
1/2 cup of olive oil, one tablespoon of olive oil for each side of the fish
1 1/4 teaspoons kosher salt, a pinch of salt for each side of the fish
1 cup of chopped tomatoes (Use the most delicious tomatoes you can find.  I sprinkle them with a pinch of salt after I chop them.)
4 artichoke hearts, quartered (Each piece of fish will have four quarters or the equivalent of one whole artichoke heart on it.)
1/4 teaspoon red pepper flakes, a pinch per fish packet
1 tablespoon of capers, about six capers per fish, optional
1 lemon cut into 8 wedges, two wedges per packet

Place fish on foil and season with olive oil and kosher salt.  Pull side of foil up around fish so you can easily line up all of the packets to distribute the remaining ingredients in an assembly line.

Add the chopped tomatoes, artichokes hearts, red pepper flakes, and capers.  You can assemble up to this point hours in advance and keep the fish refrigerated or in a cool place until you are ready to serve them.

Heat grill to high or oven to 400 degrees.

Just before you are about to cook the fish, squeeze two wedges of lemon for each piece of fish AND LEAVE THE LEMON WEDGE WITH THE RIND IN THE PACKET.  Seal them up, leaving space inside the packet for air.

In the oven, start with 5 minutes, and then open one to see if it needs another minute or two.  You can tell if it is done by gently moving a piece with a fork.  If it is translucent it needs more cooking time; if it is opaque it is cooked.