"This is Your Brain on Crafts" by Lisa Borgnes-Giramonti


I wasn't sure if I should put this post on my JOY blog or here on my main Maili Files blog.  What caught my eye and made me read the article in the first place was the word JOY embroidered in the article, but then I noticed the other words too such as bake, bliss (and if I were writing the article "cooking" would most certainly be there too.)  The article is written by Lisa Borgnes-Giramonti. who writes the blog A Bloomsbury Life . "Lisa is an artist and a self-described, "domestic explorer" (which might be the loveliest notion ever...I might have to "borrow" it) who has managed to create a a magical, rambling, rose-strewn life focused on food, art, comfort, literature, nature (the truer things)... right slap in the middle of bustling Los Angeles." quotes Josyln who writes the Simply Lovely Blog.

I read this article in my Martha Stewart Living magazine and felt it was so valuable that I wanted to share it on facbook.  Yet when I went to find it I couldn't find it anywhere on the Martha Stewart's web site nor Lisa's blog.  Because so many people struggle with stress or depression or finding a purpose, it seemed valuable to post this article that explains the science behind why "hobbies" actually bring calm and comfort to our lives.  For me, cooking certainly gets me there.  But I also love anything I do with my hands from knitting to paper crafts to writing to gardening.  I know I've also written before about what some describe as flow:  the calm that spreads through your body from doing something you love that requires repetitive motion.  Sometimes they are solitary pleasures and sometimes there is a shared bliss that comes from cooking with friends or being in an art group.  Think of the quilting bees of former generations and how working together on art project while visiting fullfills both our need for connection while providing soothing calm.   My friend, Anita, said she and her husband play backgammon together.  Chess, Backgammon, scrabble:  whatever takes your mind off the treadmill of the day and lets it relax.

"When the midbrain is engaged by the repetitive movement movement involved in many crafts, the temporal lobe is unable to focus on worry or stress."  says psychologist Robert Maurer. 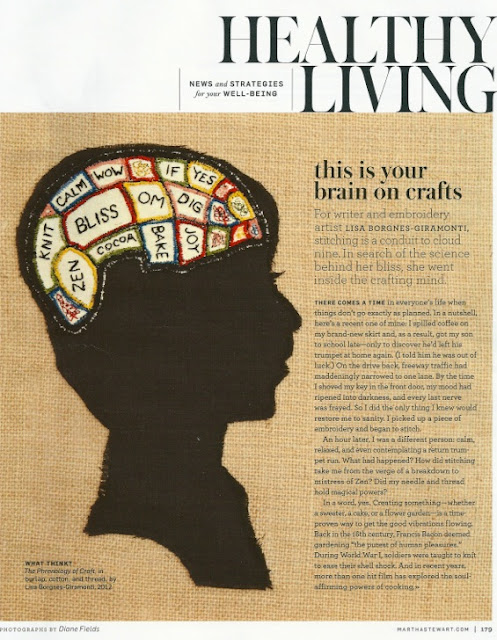 THIS IS YOUR BRAIN ON CRAFTS

For writer and embroidery artist Lisa Borgnes-Giramonti, stitching is a conduit to cloud nine.  In search of the science behind her bliss, she went inside the crafting mind.

There comes a time in everyone's life when things don't go exactly as planned.  In a nutshell, here's a recent one of mine:  I spilled coffee on my brand-new skirt and, as a result, got my son to school late--only to discover he'd left his trumpet at home again.  (I told him he was out of luck.)  On the drive back, freeway traffic had maddeningly narrowed to one lane.  By the time I shoved my key in the front door, my mood had ripened into darkness, and every last nerve was frayed.  So I did the only thing I knew would restore me to sanity.  I picked up a piece of embroidery and began to stitch.

An hour later, I was a different person:  calm, relaxed, and even contemplating a return trumpet run.  What had happened?  How did stitching take me from the verge of a breakdown to mistress of Zen?  Did my needle and thread hold magical powers?

In a word, yes.  Creating something--weather a sweater, a cake, or a flower garden--is a time-proven way to get the good vibrations flowing.  Back in the 16th century, Francis Bacon deemed gardening "the purest of human pleasures."  During World War I, soldiers were taught to knit to east their shell shock.  And in recent years, more than one hit film has explored the soul-affirming powers of cooking.

According to psychologist Robert Reiner, who has studied the benefits of crafting, cheering up and chilling out are only the beginning.  "Crafting can decrease your heart rate and blood pressure and even improve sleep," he says.  He compares the emotional boost to a runner's high:  "Your breathing takes on a regular pattern, which shuts down the body's anxiety-producing fight-or-flight response."

Robert Maurer, A Los Angeles-based psychologist who studies creativity, compares crafting to another practice with proven healthy benefits:  meditation.  "When the midbrain is engaged by the repetitive movement involved in many crafts, the temporal lobe is unable to focus on worry or stress, he says.  "The cortex--which controls conscious thought--becomes quiet and peaceful."

Knitter and former physical therapist Betsan Corkhill witnesses this sense of peace every day as the director of Stitchlinks, a United Kingdom based organization that promotes the connection between knitting and well-being and organized knitting groups for people dealing with depression and other health issues.  "When concentrating on a pattern, you're required to be so present in the moment that you can't worry about the future.  Even physical pain fades into the background,"  Corkhill says.

Interestingly, though, while your midbrain is absorbed in the process of making something, the rest of your brain is oftentimes far from idle.  Have you ever noticed how, after trying for hours to come up with a solution to a problem, you take a break to, say, make preservers and, in the middle of sterilizing the jars, the answer suddenly comes to you?  That is known as the breakout principle.  "The brain gets tired after about 90 minutes of trying to figure something out," says Maurer.  "When you engage in a pleasurable, relaxing activity like crafting, it gives the conscious mind a break from solution-searching, during which the unconscious mind may come up with solutions on its own.  Neuroscientists don't understand quite why this happens, but it's a well documented phenomenon."

These sorts of breakthroughs are a great byproduct of making things (and one reason crafters often describe their chosen hobby as "my therapy,")  but they're not what motivates most of us to grab our glue guns.  Ask any cook, gardener, or woodworker why she devotes so much time to her practice and she'll likely answer, "because it makes me happy."  Crafting is, above all else, a source of pleasure--and  pleasure in a number of forms.  First, turning the mundane (a piece of wood, a hunk of clay) into something beautiful or delicious provides the maker with a sense of accomplishment, which activates a pleasure in the center of the brain known as the nucleus accumbens, says Maurer.  Having a reliable route to achieving that feeling is especially important when you're mired in a frustrating relationship or your latest work project gets stuck.

If you then give your creation to someone else, you experience a second form of pleasure.  "Doing something for others can light up the posterior superior temporal sulcus." says Maurer.  Like the nucleus accumbens, that region is also a pleasure center:  when stimulated, it signals the release of the happiness-producing neurotransmitter dopamine.

But you don't even have to finish that shadow box or glaze that clay vase, let alone give it to someone else, to get a boost.  The process of crafting involves a variety of sensory pleasures in its own right.  "Working with yard soothes your brain the same way that touching a soft pet does." Corkhill says.  And, says Maurer, "Looking at something aesthetically pleasuring distracts your brain from worries--beauty can literally crowd out negative images."

The upshot?  What matters is not so much the quality of the end result as the hours you spend getting there.  So everyone with a cupboard full of UFO's (Unfinished Objects) or SWHW's (Something Went Horribly Wrong,) take heart:  you have not been wasting your time.