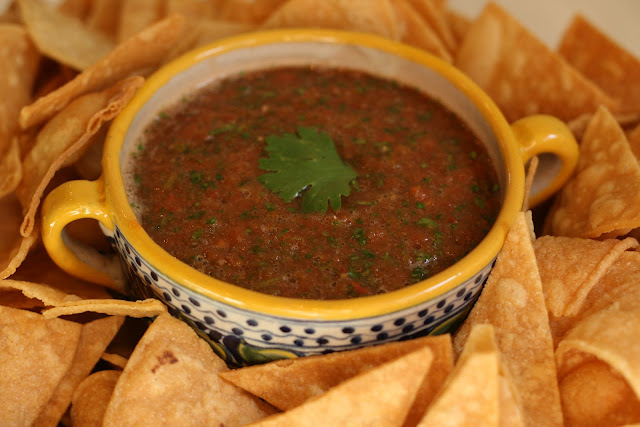 I always serve mine with homemade chips.  I just buy corn tortillas, cut them in triangles and fry them. 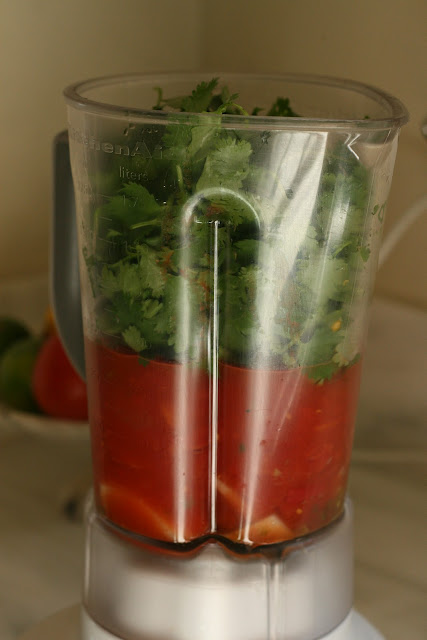 This super easy and quick salsa is made in a blender.  Just throw
in all the ingredients and do a quick blend.


This recipe is from my cookbook Football Food that will be released in August 2008.  I  co-authored the cookbook with its creator, Kellie Lawless.  Kellie was on the recipe testing e-mail list and asked me for some recipes and I eventually became the co-author.

You may never buy pre-made salsa again after making this.  It is so quick and easy to make, yet is still just as fresh as if you chopped it by hand.  You literally throw everything in the blender, blend until it is just combined and can serve it immediately.  No messing around chopping a bunch of onions, tomatoes and chiles.  It lasts for at least two weeks in the refrigerator.

Throw everything in a blender and blend until onion is chopped completely.  I think it is best when made and served within three days, but it will keep for up to two weeks in the refrigerator.  I store mine in canning jars.

It is the perfect recipe to use with the salsa cream sauce.

Jennifer Valencia said…
This is a great salsa you can make anytime of the year. My daughter and I loved making and eating it. Who doesn't like a recipe that you can throw everything into the blender and Wa-La!.
April 29, 2009 at 2:13 PM

Sherrie Petersen said…
I love fresh salsa and so does my family. Everything is better when it's home made, huh?
September 9, 2009 at 6:26 PM